13 Hours in Islamabad is the tenth episode of Season 4 of Homeland. It aired on December 7, 2014.

The security breach at the Embassy has far reaching consequences.

Carrie and Saul are pulled from the damaged van by the Marines, but John Redmond didn't survive. Quinn uses the radio to ask the Marines to return, but Taliban soldiers shoot from nearby buildings, pinning them down. Martha, Dennis, and Lockhart hide in the vault, a secure lockdown room, with a package containing the names of all CIA informants in Pakistan. Haqqani and his Taliban soldiers arrive. They gun down many embassy personnel and keep the survivors as hostages.

As Marines are hit around Carrie, she phones Col. Aasar Khan, asking him to send the Pakistani military. However, Tasneem reveals that the ISI is helping the Taliban, to Khan's disapproval. Tasneem asks Khan to delay the soldiers by 10 minutes.

Quinn and a Marine succeed in killing some of the Taliban. Haqqani goes to the vault and executes several embassy personnel. He demands the package of informants. Against Martha's wishes, Lockhart yields and opens the vault. The package is handed over. However, Haqqani executes Fara Sherazi regardless. Before he can execute the others, Quinn and the Marine open fire on the group; Haqqani is wounded but escapes. Carrie, Saul, and the bodies of Marines are brought back to the embassy by the Pakistani military.

The White House cuts relations with Pakistan and prepares to evacuate the surviving embassy personnel. Dennis asks Martha for a belt to commit suicide with, in order to lower the impact on Martha's career, but he changes his mind. Max grieves over Fara's death. Quinn decides to take matters into his own hands. He abducts Farhad Ghazi, the ISI agent who kidnapped Saul, and prepares to torture him in a warehouse. Carrie is given permission to stay behind for five more days, in order to find Quinn and bring him home. 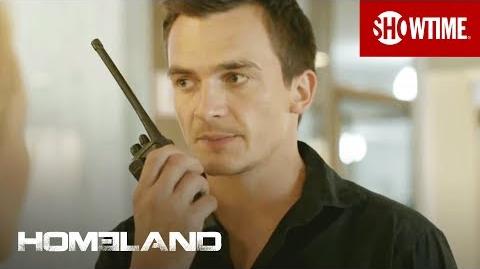