A False Glimmer is the season finale of Season 5 of Homeland. It aired on December 20, 2015.

Can Carrie Mathison stop the terrorist attack at Berlin Central Station? And how does Saul Berenson react to Allison Carr's (Miranda Otto) renewed betrayal? The events of the season finale come to a head.

Carrie is in the subway tunnel and is overpowered by Qasim, who heard her coming. But he only holds her and gives Carrie a chance to introduce herself and explain what she's up to. He wants her to go, but Carrie speaks into his conscience, so he explains what should happen. You only have four minutes before the gas is released. In the distance they see Bibi. Carrie explains that Qasim has to stop him. But he doesn't just want to shoot Bibi, he wants to dissuade him with words. As he sets off, Carrie follows unobtrusively. Qasim tries to dissuade Bibi from releasing, but Bibi just gets angry and wants him to leave. Qasim says that he will have to kill him then, which Bibi does. He shoots down Qasim, but he uses his last strength to attack Bibi. Carrie is now also nearby and fires several times before a train blocks her view. The release was prevented. Bibi is dead. Carrie hugs Qasim and thanks him for his help and that he also helped Quinn. Qasim dies in her arms and Carrie says a prayer for him.

The emergency services have arrived at the main station and Carrie is being cared for outside. Saul comes to her and asks what happened. Saul tells her they are looking for the other terrorists. Carrie wants to know what happened to Allison, but Saul has to admit that she's on the run. Carrie just wants to go home.

A little later, Carrie arrived at her apartment and first asked if Jonas was there. But nobody is home. She checks to see if his things are still there and finds suits in the closet. Carrie goes into the bedroom, lies down on the bed and quickly falls asleep.

Saul talks to Ivan and tries to corner him because Allison was busted and he doesn't have a chance anymore. Since Allison is on the run to Moscow, it is now clear that she is working for him. Saul wants Allison handed over. But Ivan doesn't reveal anything and claims to know nothing. He offers him a new identity if he helps them. But Ivan is rather amused. Saul explains that he is only making this offer now. Ivan refuses, however, explaining that he sent Allison after Saul because he was such an easy victim after their divorce.

Allison reaches her stopover where her wound is treated by Dr. Rudolph is taken care of first. Meanwhile, Otto explains to Laura excitedly that the BND has come to arrest Laura. She quickly goes to the safe. Astrid enters and declares Laura arrested for having documents in her possession that could endanger security. Astrid also explains that Laura will be extradited to the USA. Meanwhile, in their office, they are looking for information about how to contact Numan, aka gabehcuod.

Jonas has arrived at the apartment and wakes up Carrie. He explains to her that the other terrorists in the Prenzlauer Berg district have been arrested and that it is finally over. Carrie is happy to see Jonas. They start kissing and undressing to make love.

Numan is at Hackescher Markt, suspiciously observing various people. He wants to set off, but the men from the BND have surrounded him and arrest him for treason.

Carrie and Jonas play cards and then revisit the events of the day. Carrie admits she's the internet's 'mysterious blonde' woman who jumped in the subway tunnel. Carrie hopes they can go back to their old lives. She wants another chance, but Jonas can't go back. He says goodbye to her because he cannot forget what he has seen and heard. He also doesn't want his children ever to be in danger again and Carrie can't assure that. Carrie is angry and twists Jonas' words in her mouth until she finally leaves the room.

Carrie is in the hospital and wants to see Quinn, but he is not in his room. The nurse explains that he is in the operating room and that this will take a while. Carrie is taken to an adjoining chapel to pray for Quinn. She presses her hand hard to distract herself with physical pain.

Dr Emory comes into the chapel and sits with Carrie to inform her about Quinn's cerebral hemorrhage. The seizure was very bad and even if he recovers, it is likely that he suffered brain damage. Carrie wants to see him. When she sees Quinn lying there, she has to hold on for a moment, realizing that she has contributed to his condition.

Four days later, Astrid is with Laura for interrogation to tell her three things. First, she explains that Faisal Marwan is dead because he jumped out the window. Laura thinks they killed him, but Astrid assures them they just made the mistake of leaving him in the room unattended. But since they still have problems explaining this, she continues with the second and says that Numan is in the cell next door and that they have all the documents back. Laura asks why she hasn't actually been extradited to the US yet. Astrid brings up Numan again, whose asylum is about to expire and won't be renewed if Laura doesn't do what they want. Laura explains that they can't deport Numan because he would get the death penalty in his home country, but Astrid only says that it's her decision.

Carrie is back in the hospital taking care of Quinn. Dar Adal is there too and lets Carrie explain to him that his condition hasn't improved and that this isn't a good sign. Dar Adal tells how he found Peter in an orphanage when he was 16 and immediately recognized him as a natural talent. He was the CIA's youngest spy. Dar Adal hands Carrie a letter Quinn gave him before his Syria trip in case anything happens to him, then leaves. Carrie opens the letter and begins to read, but is then interrupted by Saul. Saul wants to know if you've thought about getting your own team and working for the CIA again. But Carrie says she's not interested because she's changed and doesn't want to do it anymore. But Saul thinks she is selfish because she is the best agent to fight the terrorists and he needs her. But Carrie refuses again and goes back to Quinn.

Allison is informed that her departure is now imminent. She is supposed to get into the trunk of a car. After about three and a half hours they will be over the Russian border. Allison isn't thrilled, but has no choice.

Laura is back on the talk show and makes a statement, which Astrid follows in the studio. Laura explains that her evidence against the BND has not been substantiated. Faisal Marwan was not innocent but partly responsible for preparing the attack. She apologizes for her mistake.

Carrie is with Otto and he asks what will become of her now. She explains to Otto that her rejection of Saul was painful, but that she no longer wants to open this chapter. Otto wants to make her an offer, but Carrie immediately says that after everything that happened, she doesn't want to work at the foundation again. Otto says that's not what he meant. He thinks Carrie is a very capable, interesting woman and still remembers many details. He was immediately won over by Carrie. She is the woman he has always waited for. He wants a partner to spend his life with. Carrie is surprised and doesn't know what to say. But Otto explains that she doesn't have to answer now, she should go to her daughter in the USA first and think about everything. He's in Washington on business in a month and they can talk about it again.

Numan calls Laura and asks why he was let go. Laura explains that they can't talk to each other anymore and hangs up without giving any further details. Meanwhile, the car carrying Allison hits a roadblock and is diverted. When the car is gone, the lock is removed again. The car drives into a trap, the tires are destroyed and shortly thereafter a hail of bullets begins, which completely punctures the car. Saul emerges from the thicket, peeks into the car, and finally looks at the trunk where Allison lies, riddled with bullet holes.

Carrie is back in the hospital and reads the letter from Quinn, in which he explains that he doesn't believe in fate and that his life has never been that of a normal person. He also confesses his love for her. Carrie locks the door and lowers the blinds. She takes the devices off him and looks at him lying there peacefully when a bright light shines out of nowhere behind her.

"I'm not that person any more". Carrie for Saul 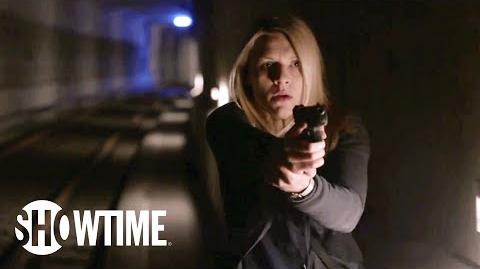 Homeland Next on Episode 12 Season 5