A Flash of Light

A Flash of Light is the fourth episode of Season 6 of Homeland. It aired on February 12, 2017.

Carrie Mathison does something for her client. Meanwhile, Saul Berenson's journey takes an unforeseen turn and Peter Quinn investigates.

Saul is in his car in the middle of the night being driven around when the driver suddenly turns off the road and pulls towards a delivery truck. There Saul is seized by men and taken into the van. They take a picture of him with their cell phone.

Sekou is harassed by the press. Carrie and Reda drive him home and explain that he has been released and that he is a free man as long as he keeps his mouth shut and doesn't go to the press. Sekou agrees.

Keane is informed by her chief of staff that the press is reporting that the new president is taking too soft a line and willfully ignoring reports that Iran has a nuclear program. She immediately recognizes the ambush. Before the press conference, which starts in a few minutes, Keane tries to talk to Dar Adal and makes it clear to him that she won't let herself be swayed from her line before she takes office. She wanted Saul's full report on Abu Dhabi. She makes it clear that she already agrees with the current president not to jump to conclusions about Iran. Dar Adal should find out which agent gave the information to the press.

Sekou comes home and is surprised by family and friends who are happy for his release. However, Reda still discusses with Carrie whether this was really a successful action. Actually, Sekou should still receive compensation, but Carrie thinks that in this case it should be enough that he is free instead of being imprisoned for 15 years. But Reda points out again that such solo attempts by Carrie are no longer allowed to take place. Carrie explains that she gets it, but also reads a text message and says goodbye. Reda sees a black SUV picking her up.

Sekou talks to his friends, who want to know how he got free in the first place. He just says that there was no real case, but his friends don't want to believe it. Rather than luck, they think he's now working for the FBI as an informant. Sekou denies this and later goes to his room and records a video. In it he immediately makes it clear that he is not an informant because he has learned that all Muslims are one big family and don't betray each other.

Saul is taken to Majid Javadi. He wants to know why Saul is in the area and explains how dangerous their meeting is. Saul confronts him with his opinion on Nafisi and the Iranian parallel program. Javadi wonders why he's asking him the truth when he's already made up his mind. Saul explains that the truth always matters to him and that he will make sure the truth matters to others. Javadi should contact him when he found out more about it.

Peter watches the house across the street again.

Carrie is with Keane, who briefs him on Dar Adal. His approach is difficult for Keane's ideas. You have to get him out of the position somehow. Carrie certainly had an idea because over the years of working with him she could facilitate any allegations. Carrie worries that she's supposed to be giving out inside information, which she's not allowed to do. Keane promises she won't end up in jail. Keane tries to persuade Carrie because it's her reforms and ideas that Keane now wants to implement. Carrie thinks hard.

Peter breaks into the apartment across from where he feels he is being watched. When he looks out the window, he sees the man coming back. Shortly thereafter, they meet in the stairwell. Peter pretends to deliver mail. The man explains that if he sees him again in the house, he will call the police.

Carrie picks up her daughter from daycare and is visited there by Dar Adal. He tells her he knows she's counseling Keane. She should stop giving her such bad advice. Carrie replies that it's up to Keane to decide. Dar Adal asks how she knows Iran doesn't have a parallel program. Carrie replies that he knows just as little that such a parallel program exists. Dar Adal threatens Carrie. She should stay out of it. Carrie threatens back, but Dar replies that she doesn't seem to know how vulnerable she is.

Saul rejoins his sister, who was worried about him. She had heard him leave the house. At breakfast she wants to know who he met. He doesn't want to reveal that. Dorit explains that she is very unhappy that he is coming back after twelve years and that it is only a cover for his work. Saul apologizes and says he really wanted to visit her. It rings at the door. To Saul's surprise, it's Etai who wants to know what the two would have done that night. Saul explains that they talked until three thirty. Etai asks if Saul ever went for a walk, but Dorit covers him up and confirms Saul's statements. Etai emphatically states that he will drive Saul to the airport. In the car, however, he makes it clear that the flight has been canceled and that his country will have to do without him for a while.

Carrie is with Quinn, who is telling her about what he did. Carrie can't believe it and wants to talk to him about it, but Reda calls and explains to Carrie that Sekou published a video in which he outed Saad Mahsud as an informant for the FBI and thus didn't stick to the deal. Carrie immediately drives to Sekou to get him to take the video down again. However, Sekou does not show understanding. He hasn't signed anything and feels safe. Carrie tries to understand Sekou and also explains her feelings about losing enough people. Although they hold the same views in principle, they do not really come together. Sekou remains stubborn. Carrie explains what she did to get Sekou out of prison. But he doesn't understand why she did it. Carrie explains that it's the right thing to do.

Etai and Saul reach the goal. where he is being held. Etai feels lied to. Saul explains that he would have said something to Etai if he knew exactly how close Iran is to having a nuclear bomb. But that's not enough. Tova will come next day.

Quinn is taking photos from across the street as a car pulls up. He walks to the front door and sees the man across the street getting into the car. Peter takes the car keys and drives after the car. Carrie woke up only to find that the keys were gone. Peter successfully tracked the car and photographed the man getting out. Peter also gets out and wants to run after him, but is told by a police officer that he is not allowed to park there. He drives away again, but still takes a few pictures of the system.

Sekou's mother brings him some tea for breakfast and repeats how glad she is that he's back. Then Sekou drives to work, which is exactly where Quinn was taking photos that night. Sekou has to explain to his friends that he took down the video so he wouldn't go back to jail. But since everything has already been duplicated anyway, he still achieved his goal. His friends believe him.

At breakfast, Peter explains that he followed the man. But Carrie sees nothing suspicious in everything he says.

Sekou is traveling in Manhattan and suddenly hears a ticking in his van. At that moment there is an explosion. Shortly thereafter, Saul is released by Etai because he has to go home. There was an attack in New York.

FRANNY: "A man came to school, and he had painted hair, and he scared Mommy."

The result is a powerful and disconcerting allegory of the United States in the post-9/11 era—Terrorism: A Love Story. Carrie’s theory about Brody begins with a legitimate, if incautious, desire to prevent the next attack, but soon sends her into a psychological tailspin. As both CIA analyst and romantic partner, she’s drawn ever closer to her target. Similarly, the U.S. government began the so-called War on Terror with the legitimate desire to prevent a repeat of the 9/11 attacks. In the years since, though, the prospect of “terrorism” seems increasingly to be used as a justification for any application of power, at home or abroad. Like Carrie, Washington hawks have fallen in love with terrorism, even while crazed by the fear of it—it is, after all, the raison d’être of the CIA, the NSA, the Defense Department, and the Department of Homeland Security. Like Carrie, the apparatus of “Homeland Security” requires “terrorism” in order to function, and thus fails to judge adequately any question of means versus ends. It is now difficult to determine where the War on Terror (armed conflict, drones, NSA surveillance, heightened vigilance) ends and the reasons behind terrorist attacks (armed conflict, drones, NSA surveillance, heightened vigilance) begin. –Matt Brennan 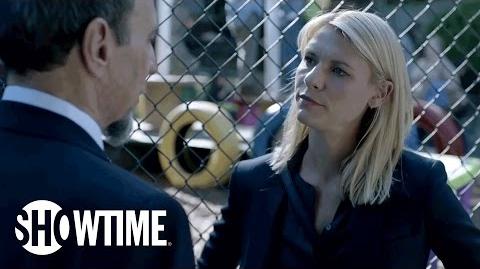 Homeland Next on Episode 4 Season 6