“THE THROAT DEMOCRACY CANNOT BE STUCK BELOW THE PEOPLE”. - ALLISON

All About Allison is the eighth episode of Season 5 of Homeland. It aired on November 22, 2015.

Carrie Mathison (Claire Danes) enlists Allison Carr's (Miranda Otto) help to uncover the truth behind her latest discoveries. She remembers their time together in Baghdad in 2005. Meanwhile, Peter Quinn (Rupert Friend) has to realize that his plan doesn't seem to work.

Quinn is in Kosovo with his companions because when Quinn was sleeping they changed the route. Quinn disagrees, but Qasim explains that he doesn't need to be told everything. He should hide in the back of the car because the people who come to see him will see him as an enemy. Quinn has no choice but tries to watch through windows.

Allison reunites with Ivan in the underground garage. She's nervous because Carrie hasn't called back yet. She wishes Ivan would just end it all, but he doesn't want any more dead bodies. Ivan calms her down and explains that Carrie trusts her and that she should take advantage of that. She should just help Carrie, be very caring and not pass on any information.

Dar Adal watches footage from the elevator, but the camera cuts out just before Saul is kidnapped. Allison arrives and is privately accused by Dar Adal of helping Saul. She vehemently denies it. She blames Dar for driving Saul to the Israelis with his accusations.

Carrie is in a church writing a note that she puts in a book there. Meanwhile, Etai and Saul talk about how Dar Adal has already contacted him and now he has two options. Either he lets himself be handed over or he goes to Israel. Saul says he can just disappear now and wants to leave, but the bodyguard holds him back on orders from upstairs.

Carrie calls Allison and says she wants to meet her near Hamburg. Allison is undecided about making the long drive and wants to know more. Carrie finally explains that Acrobat is still alive. Allison feigns surprise and agrees to meet.

Carrie's first day at work in the city. While waiting for Allison, she sees pictures of missing soldiers hanging on the wall, including Brody. When Allison comes and wants to instruct her in the tasks, they meet Judge Samir Khalil, who is trying to establish the rule of law. He's excited to meet Carrie as the new Civil Administration Assistant because the Justice Department works closely with them. He is optimistic that they will be successful. Khalil explains that he has urgent matters to discuss with Allison and that he will therefore visit her again tomorrow for her appointment. Allison welcomes Carrie back to her office and finally explains her responsibilities to her. She also explains that the task they have in Baghdad is almost hopeless because the daily violence and chaos are too confusing. Allison also explains that she's frustrated and just needs to spend a few days at home in Wisconsin. She also talks about Milan, where she likes to go shopping, and the Caribbean, where she likes to sit at the beach bar "Banana Joe's" and drink the best daiquiries.

Otto calls Carrie and wants to know how she's doing. Carrie explains that she got hold of a laptop and could use Laura and Numan's help. Otto promises to take care of it. Carrie asks if Jonas contacted him, which Otto denies.

Samir Khalil sits with Carrie and Allison at their appointment and explains how judges and clerks who work to keep the justice system working are being phased out and Americans are doing nothing about it. Allison says she's raised the issue with her commanders several times. Khalil believes that Ahmed Nazari names the opponent and gets paid well for it. It's all obvious to him, but Allison says they're still investigating and have no proof. Khalil is angry because he feels let down. Carrie promises to take care of Nazari personally. When Khalil leaves, Allison explains that Nazari is an informant for her and is operating under the alias Acrobat. He regularly provides her with information of the highest importance and Carrie will meet him as soon as possible. However, Nazari is slightly paranoid and very corrupt. Allison thinks the main reason he works for her is because he's into her.


Qasim brings Quinn something to eat and Quinn asks what they are still doing here. Qasim says they still have things to get and Quinn suspects they are guns, so he immediately explains that they can't get through the border with them and just end up in jail. Qasim says that Bibi has to decide what Quinn is allowed to know.

Saul and Etai are playing chess when Tovah comes in and wants to talk to Saul alone. She would like to hand him over to Dar Adal to avoid an international scandal. But Saul then tells her that the Russians are probably responsible for the death of General Youssef and want to blame the Israelis. But he is still gathering evidence. Tovah gives him one more day, more is not possible.

Numan joins Carrie and explains what she has to do. He gains access to the laptop and tries to get to the hard drive.

Allison introduces Carrie to Nazari, who immediately declines because he only wants to work with Allison. Carrie tries to be nice, but Allison has to talk Nazari well before he even listens to Carrie. But Carrie's empathy continues to meet resistance. He is the one who sets the conditions and he only wants to work with Allison. When Carrie offers to pay him more money, he is interested, but it's not enough for trust. He goes. Allison says a lawyer is in court and they should give him a week.

Quinn watches as some people leave the premises, so he secretly gets out of the car and approaches the house. He climbs through the bathroom window and searches a few bags. Under a bed he finds numerous gas masks. He can leave the house in time.

Allison is in the church near Hamburg and takes the note from the book that Carrie wrote.

Allison talks to Nazari, who wants to touch her, but Allison refuses. She makes it clear that she will be gone in two weeks and that this needs to be clarified. She offers more money, which he declines. Nazari shows Allison a suitcase full of money. This is lying around on pallets in the Ministry in the basement and he took a few bills with him every day. It should be for both of you. He loves her and wants to elope with her.

Carrie sees Allison returning and immediately asks how the meeting went. She explains that Nazari will work with Carrie because she offered him more money, but that he will first visit his sister, so Carrie won't be able to see him for two/three weeks. Carrie is happy.

Ivan suddenly stands next to Allison in the church and asks for the meeting point. He explains that he will have a man there in case Carrie already knows something they didn't expect. He is now prepared to take more bodies if necessary. Allison complains that Ivan never tells her the whole truth, but Ivan replies that it's his job to protect her. She eventually explains that when she lights a cigarette, she gives the signal to turn Carrie off.

Allison meets up with Nazari again because she will be leaving in three days. Nazari thinks she doesn't want to follow the plan after all, but Allison has everything set up. He's supposed to send a couple of suitcases with money under diplomatic protection. She gives him a plane ticket to Geneva, explains the next steps and then looks forward to meeting him in the Caribbean. Suddenly, Ivan walks in and explains to Allison that her time at the CIA is now up, but he has an offer to make her. Allison explains that she is not a traitor, but Ivan says that since Russian and American interests have never been so closely aligned, she will certainly not betray her country. He even offers to give her information so that she can work her way up the CIA if she helps him. In this way, they both benefit and ensure a safer world.

Allison has arrived at the meeting point and sits down. She lays out her cigarettes and waits for Carrie, who is watching everything from a safe distance.

A major attack has taken place in Baghdad. Allison confirms that Nazari died in the process.

Carrie sits down next to Allison and immediately tells her that they want to kill her. She says that the documents show that Khalil urgently wanted to speak to her at the time because he knew Nazari was still alive but was prevented from doing so. She asks Allison if she ever suspected Nazari might have been a double agent. She replies that it's always something to consider, but they paid him a lot of money so it's unlikely. Carrie wants Allison to go over her old reports on this. Allison is reluctant because the reports are top secret, but Carrie is so desperate, because she lives in constant fear but wants her old life back, that Allison promises to do whatever she can. Carrie only has to promise that the secret documents will never be made public. Promising, Allison puts the cigarettes back in her pocket and leaves. Carrie explains that she can contact her through Otto Düring.

Quinn notices a van driving onto the facility. He gets out and asks Bibi what's going on here. He claims that they now need a larger car due to the new supplies. But Quinn thinks they are guns. He gets knocked out. Qasim asks Bibi what the point is, because you can't get to Syria without him. Bibi explains that this was never the goal. You drive back to Berlin.

Saul is woken up by Etai in the middle of the night because Dar Adal is already on his way. Etai wants to help him and take him away. Meanwhile, Bibi and his people are driving back to Berlin. Qasim says a prayer while Quinn wakes up tied up in the car and sees what they have loaded. Carrie is lying on a bed looking at a photo of her daughter. Suddenly Numan reports that he has access to the hard drive and wants to know what to look for. But Carrie says she has no clue. Suddenly the laptop's screen saver starts and you see Nazari sitting at a beach bar. Carrie has Numan google "Banana Joe's" in St. Lucia in the Caribbean. She remembers the conversation with Allison where she mentioned the bar. Numan sends her pictures of the bar and realizes it's the same bar as the photo. She realizes Allison lied to her.

To explain and get to know a little more about Allison's personality and story, the writers used the old flashback feature, not that it's bad, on the contrary. We were able to understand and know a little more about the attitudes of this character who grew up in the series. For this, we returned in 2005, in Baghdad, where Allison holds the position of head of the “Free Iraq” operation. While we meet a calmer-looking Carrie, eager to work, the opposite occurs with Allison. We saw how much it is worn out, discredited. Interesting this move they made, whereas currently our own Carrie shows the same symptoms.

Carrie looking at Brody's picture on the board, alternating with the memories in the present. How not to miss these two?

"The only person who can connect him to us, is you." 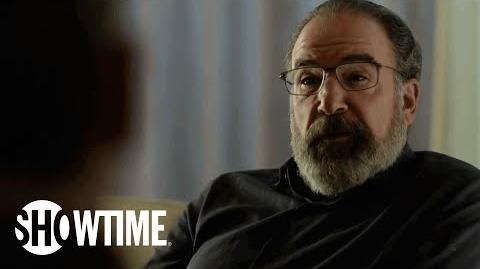 Homeland Next on Episode 8 Season 5