During the recording of the TV show "The Real Truth" people open up about Keane's intentions. They wanted to show that their son was no hero at all and that Keane's politics were dangerous. Behind the scenes, the presenter also tries to convince his most important man to testify in front of the camera. Rudy is in front of the camera shortly afterwards and tells what happened on the day the President's son died. They were ambushed and he ran away instead of fighting.

Keane comes to work and is shown the plan for the day. You start with the meetings. Meanwhile, Saul meets with Javadi and explains to him that Keane is busy at the moment and she hasn't been able to take care of his request. He is worried, but Saul tells him to take precautions. Her circle of friends is currently not particularly large.

Saul is with Carrie, but Max says that Carrie hasn't come out of Franny's room since yesterday and is depressed. Max tells Saul what happened. Saul then goes to Carrie and tries to talk to her. She's very sad, keeps telling her she's not a capable mother and doesn't even know where Franny is. Saul cannot present his request.

Peter is out in the woods with Astrid. They talk a bit and Astrid notices that he talks a lot more than he used to. Peter apologizes for yesterday and then wants to know how long Astrid can stay. She says she can stay two weeks. Back at the house, Astrid wants to go jogging and explains that he should take the car if he ever wants to flee again. When Peter is alone, he goes through Astrid's things and finds medicine and documents with his picture there. He goes to the car and finds a gun there, among other things. He takes out the balls and throws them towards the lake.

Saul took Carrie to where Franny is staying. She wants to go to her, but Saul explains that she would make it a lot worse by doing so. He can stop her and then explains to her why he wanted to see her in the first place. He tells what he found out and that Javadi would provide the evidence and that he is here in New York. She has to help him talk to Keane. Carrie now tells him what she knows from her research and insights into the Sekou case. She suspects that Dar Adal is involved.

Peter is shopping with Astrid and sees the man he saw across from Carrie's apartment. As they drive back, he spots the car parked at a motel they drove past. Astrid notices that Peter is watching something, but he explains that nothing is wrong. Back at the house, they unpack and Peter wants to know who owns the house they live in. She explains that it probably belongs to friends of Dar Adal and that she doesn't know anything else. Peter is angry about this because he finds it strange that she has no information and asks why she is here at all. Astrid says that Dar Adal asked her because Peter wasn't feeling well. Since she sees Peter as a friend, maybe even more, she came. Peter explains that you're not friends if you've slept together out of loneliness. He becomes paranoid and even questions whether Astrid is really called that. He also believes that she would have spoken to the man while shopping. Feeling threatened, he eventually punches Astrid, then takes her car and flees.

Javadi is picked up by Carrie. He marvels that Saul apparently has no one else to trust. Carrie thinks that as few people as possible should be involved to keep him safe. Javadi, however, believes that Saul simply doesn't have as much influence anymore. Carrie says never underestimate Saul. Also, they did good work together and there's nothing wrong with trying to save that work.

Keane is waiting for Javadi with Saul in a warehouse. However, she is not happy that she agreed to the meeting in the first place. After all, Javadi caused many dead American soldiers. She wonders why he would even want to help them. Saul explains that he has been blown and is now alone. Carrie arrives with Javadi and after a security check, he faces Keane. They talk and Javadi explains that parts of the Israelis and the Americans want the deal with Iran to burst. But then Javadi also explains that it is actually true and that Iran has started a parallel program in North Korea. Saul doesn't understand what Javadi is saying, but he says that's the only way he could have spoken to the president. Keane has heard enough and wants to leave. Carrie goes after her and explains that Saul would not be so wrong, but Keane says that maybe she was wrong and should never have listened to Carrie. Saul, meanwhile, is at odds with Javadi because he wants to know why he suddenly told Keane such a story. He realizes that Dar Adal must have persuaded him to do so and Javadi explains that he doesn't always want to be concerned about his safety and prefers to take the safe route.

Dar Adal is in the TV studio with the presenter, who shows him a recording of the ambush by Andrew Keane's troupe. Here you can see how Keane tries to save people from his squad and dies in the process. He then shows Dar how he edited the tapes and the guest statements together in a way that made Andrew look like a coward. Dar Adal assures that there is no other copy of the video.

Peter drove to the motel, ambushed the man and knocked him out, but then realized it wasn't the guy across the street from Carrie's apartment. Startled, Peter pulls back and is glad that Astrid is still there. She says she had no other choice because there was no one else in the area. But she wants to get going right away. Peter begs her to stay with him. He apologizes for his behavior and explains that he needs her. After all, she is a friend to him. Astrid smiles when suddenly a shot is fired. Peter goes down but didn't get hit properly. Astrid explains that she has a gun in the car. Peter is still trying to stop her, but is not able to do so yet. Despite a few shots, Astrid gets to the car, gets her gun and takes aim at the opponent, the man Peter was looking for. She fires several times, but no shot is fired because Peter had removed the ammunition. Before she gets it right, she's already targeted and hit hard. Shortly thereafter, the shooter stands in front of Astrid and kills her. Peter screams in anger, but he can only try to escape. At the lake there is another shot and Peter falls into the water. The shooter fires several more shots into the water and then waits a moment. The water is calm so he turns and leaves. A little later, Peter reappears at a different point.

Carrie had a depressive episode in season 6 though after frannie got taken away. Max called it “the black dog” - So, fun fact. “The black dog” was a phrase coined by Churchill when talking about his bipolar disorder.

“You idiot. Don’t you know anything?” - Astrid for Quinn

My reality has a dreaminess. And my thoughts keep disappearing. - Quinn

“Javadi pushes every button in Carrie’s worn-out body by going so far as to tell her that he found a nice final resting place for Brody in an Iranian cemetery for martyrs — this after Carrie obliquely references his sacrifice for the cause of getting the Iranian nuclear deal done. Javadi promises to draw her a map — as if she’ll be making a pleasure trip to Tehran soon.” – Cynthia Littleton 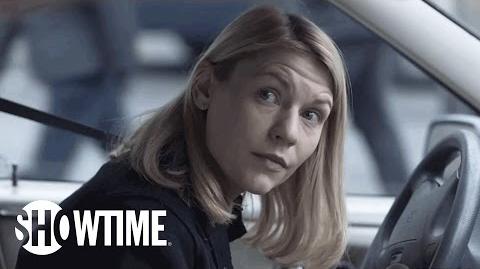 Homeland Next on Episode 8 Season 6