America First is the season finale of Season 6 of Homeland. It aired on April 9, 2017.

While Dar tries to get his plan back on track, the situation in front of the hotel of the president-elect Elizabeth Keane escalates. Can Carrie Mathison and Peter Quinn intervene in time?

Dar Adal meets Christopher in a restaurant and is immediately led to his interlocutor, Senator Elian Coto, who is being held captive in the freezer. Dar doesn't find this funny at all, but Dar is upset that Coto and McClendon worked behind his back to use Brett O'Keefe's propaganda machine to scapegoat Quinn. Now he has to suffer for that. Dar leaves and Coto is hosed down with a bucket of cold water.

Carrie informs Rob Emmons about the explosion and she learns that General McClendon had assembled a team to protect the President. Carrie is suspicious and wants to get back in touch. She asks Peter's name again and he confirms Carrie's suspicions. You want to be on your way immediately. Meanwhile, McClendon informs Agent Thoms that there is a threat to the President. Thoms makes it clear that Keane certainly won't be put in a safe house again. So McClendon suggests clearing the street first and searching the hotel.

Violent protests against Keane are still taking place outside. She thinks that confronting O'Keefe wasn't a good idea after all. Saul says, however, that this cannot be said with certainty. You have shown courage. Keane asks Saul about his past experiences and Saul explains that he has never experienced anything like this, Keane wonders if she is really that scary, which Saul confirms because she cannot be controlled from within. Keane wonders if she's the right person for the job, but Saul says it's all right.

Dar Adal is back with Coto, who is severely cold and wants to do anything to make it go. Dar asks him about Peter Quinn, but Coto says he has no idea what he's talking about. Meanwhile, Carrie and Quinn have arrived at the hotel. While Carrie tries to get into the hotel, Quinn wants to look around outside. He fights his way through the protesting crowd and watches the snipers on the roof. Dar Adal finishes his interrogation and lets the senator go. He calls McClendon and confronts him that Peter Quinn is apparently being framed for an assassination attempt on the President. Dar doesn't understand why they are taking this step, because they have Keane under control and their plan is working. He wants to know what McClendon is up to. However, he says that he has no plans at all. He should rather question his source.

Carrie is with Saul and Rob Emmons and shares what she thinks she knows. Emmons asks what Saul thinks, but an agent interrupts her and explains that there are multiple sources of bombs talking about the hotel, so an evacuation must be initiated. Carrie says that what she expected is happening now. Everyone goes down the stairwell to the underground car park and is divided among various cars. Carrie gets a call from Dar Adal. She scolds him, but he explains that she must do everything she can to prevent the car with Keane from getting on the road. She doesn't trust him, but Dar explains that the bomb threat was a hoax because the hotel has been searched for bombs regularly for months. Outside the hotel it is much more dangerous. When he brings in Quinn and tells him to act as an assassin, Carrie is convinced and jumps in front of Keane's car to keep it from going up the driveway. Thoms gets out and asks what this is about. She asks to wait when shortly afterward a bomb explodes at the end of the driveway. The protesters flee and Quinn takes the opportunity to get closer to the hotel.

Carrie and Thoms lead Keane back to the hotel. McClendon, meanwhile, is watching all the cameras but can't get confirmation that Keane is dead. His team, armed, starts walking down the driveway. You see the car Keane was in and now try to find it. Meanwhile, McClendon gets a photo of Quinn, which shows that he also entered the garage 30 seconds ago.

Agent Thoms separates from the women to see who might be following them. Shortly thereafter, he encounters McClendon's two men who are looking for Keane. Thoms wants them to put their guns down, which they obey. Thoms thinks he's safe and can't react when they use the guns and shoot Thoms. Meanwhile, Carrie and Keane are heading back downstairs. Carrie stops the elevator and tells Keane that they will keep trying to kill her. You now have the choice to stay in the elevator and hopefully not be found, or to flee. Keane definitely doesn't want to wait and Carrie is glad and lets the elevator continue down. When they arrive, they meet Quinn. McClendon's men are also on their way back down when they see the elevator gauge. Quinn fills Carrie in on the situation out on the street. They get back in the car. Keane lies between the seats, Carrie lies on top and Quinn drives. He asks Carrie to do as he tells her. You drive off. McClendon's men are still shooting, but they're already gone. But they let McClendon know, who immediately passes on the fact that Quinn shouldn't be allowed to escape. He stopped the car on the street and took a quick look around. Then he tells Carrie to stay downstairs. He races towards the barrier. The men open fire. Just before the car reaches the barrier, the armored glass breaks and Quinn is hit several times. He drives the car through the barrier and as far as he can go, but slowly loses consciousness. A few blocks further the car comes to a stop. Carrie asks if Keane is okay and finds out that Quinn is dead. Outside are several citizens looking through the window and taking photos. Keane asks Carrie who saved their lives and Carrie gives Peter's name.

Six weeks later, O'Keefe again gave a hate speech on his show against the president, who had meanwhile been sworn in behind closed doors. In the past 34 days of her presidency, she has kept nothing of what she promised. They did not abolish the Patriot Act but tightened it. She locked people up for no reason. He thinks they're heading towards civil war.

Carrie has gathered some heads of government institutions and tries to explain to them that Keane wants a full investigation of the conspiracy and that's why all the files have been requested. But nobody should worry. Don't listen to O'Keefe. There will be reforms, but no one should be afraid of being locked up. After the conference, Saul insists that he can finally talk to Carrie. She's been working harder since Quinn's death, and Saul is concerned that she'll eventually hit a brick wall. However, Carrie rejects Saul and says she has no interest in Saul worrying about her. Carrie goes straight to the President and explains to him that she was able to calm everyone down first. Keane's new chief of staff, David Wellington, is satisfied and hopes that perhaps no one will give more information to the press. Carrie defends the people, explaining that while certainly not many voted for Keane, no one had anything to do with the conspiracy. You've known everyone for a long time. Keane asks to speak to Carrie alone. She offers Carrie to move to the White House and officially advise her. Carrie feels honored, but first wants to see if Franny is going to work. She has a visit from the social worker the next day to assess whether Franny can go back to Carrie. Keane agrees that she'll work it out and asks Carrie to look into a plan to send 5,000 troops to the Baltic States before she leaves.

Saul visits Dar Adal in prison. Dar laments that every day he is asked who else was involved in the conspiracy. As if there were hundreds. Saul explains that he would have liked to have been able to talk Dar out of it, but Dar says he knew Saul's arguments anyway. Nor had he ever intended it to reach such dimensions. He had lost control. He also doesn't find it forgivable what he did, but he's not sure if it was wrong. He thinks Keane is dangerous because there's something very un-American about her. Dar also asks Saul to say hello to a young man.

Carrie prepares for the social worker's visit. But when the doorbell rings, it's the completely drunk Max who gets upset about how Quinn is treated on the internet. But Carrie explains that she doesn't have time for that now and sends him to Quinn's apartment. Shortly thereafter, the social worker rings and asks to be shown the apartment. She is very optimistic when she has Carrie sign her. Finally, Carrie asks if it would be bad if she took a job in Washington. But since they support the children's parents working, there are no problems. When Carrie is alone again, she goes down to Quinn's apartment and finds Max sleeping there. Carrie decides to put Quinn's things away. She finds a book in a drawer with photos in it. They show Quinn's son. The last picture is one of Carrie though. She starts to cry and Max, who has woken up, comforts her.

Carrie gets a call from Saul, who shows her via Facetime how he's being taken into custody at gunpoint. He explains to Carrie that she has to bring the president to her senses. Carrie turns on the news and learns that there have been many more arrests. Chief of Staff Wellington explains that the President is sending a clear signal. Carrie tries to reach Keane, but she is in a meeting. Carrie drives up to her and is intercepted by Wellington, who tries to justify the actions. Carrie counters her arguments, but Wellington makes it clear that according to NSA information, all people are connected to the conspiracy. Carrie is angry because a day ago she told everyone they were safe. Wellington admits to using Carrie. Carrie tries to get to the President, but the Secret Service blocks her way. Carrie just addresses them through the door, hoping to be heard. She explains that innocent people are being captured and she can't let that happen. Keane heard everything but didn't respond. Carrie is eventually tricked into leaving. From afar she casts a bitter look at the White House. 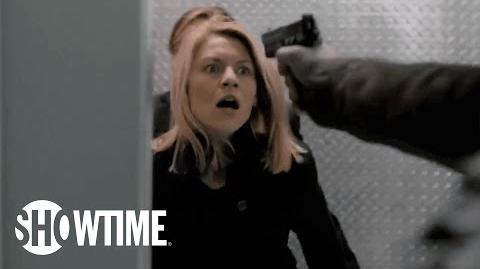 Homeland Next on Episode 12 Season 6