Carrie makes a move. Wellington has a reckoning. Saul expands an operation.

Carrie begins investigating Dante Allen. Meeting at the Treasury department with Dante's ex-wife Audrey Navarro, Carrie is surprised to find that she seems nothing like the bi-polar woman Dante had described as his ex-wife. Audrey also dispels Dante's claims of drinking. He wasn't an alcoholic, only bitter. As Audrey describes it, Most of Dante's bitterness is reserved for the unfairness of his being sent home from Kabul, while the CIA station chief - whom Audrey does not name, but describes as a woman "who was completely off the rails" - got promoted after she "drops a drone on a wedding party, killing 40 people." Clinching Carrie's suspicions is Audrey's revelation that Dante has a new job, one that involved a lot of travel.

Saul expands his operation, linking Simone Martin with efforts to undermine the President by embarrassing Wellington, and by linking herself to both Wellington and the murder of General McClendon, the White House. Saul forces Max to join his operation, blackmailing him with evidence of his participation in Carrie's illegal surveillance. When Saul fails to convince a judge to issue a Mandamus for Simone, he turns his attentions to Dante, whose overseas travel links him to Simone.

Wellington, having learned of Saul's findings, writes a letter of resignation. The President receives the letter while preparing for a ceremony to honor servicemen involved in the attack on an Iranian arms convoy. Dismayed by the letter, she meets with Wellington at home, and refused to accept his resignation.

That night, Carrie and Dante teased each other knowing they were spying on each other. As the tense confrontation turns into sex, they are interrupted by federal agents sent by Saul and, assuming Dante was alone, they break into the apartment and take Dante away in handcuffs on Saul's orders.

The true climax of the episode is the final shot of Saul, looking at Carrie like a parent beyond disappointed at his once favorite offspring. And after Carrie pulls a blanket over herself and calms a frightened — and definitely traumatized — Franny, she watches as Saul walks in and surveys the scene. He just looks disappointed in his former pupil. Carrie, then, almost looks defiant, even though she's the one who did the exact opposite of what Saul had told her to do. Now Carrie's never one to shy away from a problem — at least, any problems over national security.

There is the repetition of a recipe here: Carrie goes to bed with the enemy, literally. Repeated - and successful.

ANDANTE: In Italian it is the present participle of the verb ANDARE (to go). Andante literally means GOING. It's also a musical term and we might see that in the episode too. Do you think it could be a play on words?

1. (especially as a direction) in a moderately slow tempo.

1. a movement or composition marked to be played andante.

“Andante” is an odd episode. The title refers to “a moderately slow tempo” (while also serving as a pun on one of the characters’ names), and in comparison to the last several weeks, this hour does feel a bit more subdued. And yet by the end of it, a lot has happened in terms of the overall arc of the season. I just wish we could have gotten there without yet another blowout between Carrie and her sister, a few more nuggets of precocious wisdom from Franny, and a couple more reasons to rescind Carrie’s nomination for Mother of the Year. (Huddling naked in the dark clutching your child after a strike team has forcibly removed the man you were just having sex with...I think that’s generally frowned upon by CPS.) We know by now that Carrie is always going to put the mission first, but the collateral damage to her daughter only gets harder to stomach. - Scott Von Doviak

Audrey Navarro says: “You know what really bugged him? The sheer unfairness of it all. Because at the same time he’s over there, trying to bring some sanity to the situation, there’s this woman, this CIA station chief, who’s completely off the rails. Right around the time he’s sent home from Kabul, a total pariah, this crazy lady drops a drone on a wedding party, killing 40 people. And you know what she gets? A promotion." - Dante’s ex-wife’s description of Carrie is a supremely self-aware knife in the side.

She said she worried about you, back then… - Carrie

In the course of “Andante,” poor Franny:

— Likely overhears her aunt basically call her mother a hard-partying whore, and her mother tell her aunt to go fuck herself.

— Frets over her mother’s frequent absences, asking Maggie, “Why doesn’t she like to be here?”

— Finds herself dragged out of her home with nothing but the clothes on her back and brought to a cheap motel somewhere in the environs of Washington, D.C., where she sees that her mother is A) dead broke and B) occasionally uses the alias “Karen Harris,” like that’s not weird at all.

— Finds herself at the apartment of her mother’s shady FBI agent / whistleblower / pharmacological monitor / possible Russian operative / friend, only for her snooping in the guy’s photo album to set in motion the series of events by which she’s awoken in a strange man’s apartment by a federal raid while her mom is fucking the dude.

This child hasn’t been neglected. This child has been scarred for life. And we haven’t even gotten to the fact that her father is a U.S. Marine turned prisoner of war turned murderer turned congressman turned accused terrorist publicly executed in Iran! Matt Brennan

I got the feeling he was interrogating her, testing her to slip or cover herself in preparation for sex. I had a violent vibe from that moment on, like he was threatening her, which she then deflected by offering sex, and even during the final question, and who knows what Carrie was going to say. I had a moment of total listening to that scene in the kitchen and living room. The same vibe, the whole scene was a weird mix of things. Carrie leaning over him was a mixture of violence and lust. Sleeping with him was a mixture of hate and lust. Carrie sleeping with him was a mix of using sex as a tool, as she always does, and being attracted to him before discovering Dante was a spy. I definitely felt a violent vibe from Dante in that scene too... Maybe sleeping with the enemy is their move and now none of them are sure who's winning? Well, he's definitely going to die. Everyone who sleeps with Carrie dies. It's a curse. 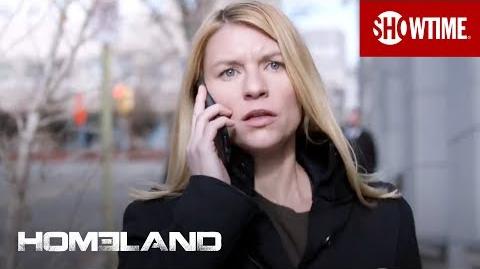 Next on Episode 7 Homeland Season 7