“ONLY WHEN OUR VOICES ARE TOGETHER THAT WE BECOME TOO NOISY TO IGNOR”. - NUMAM

Better Call Saul is the fifth episode of Season 5 of Homeland. It aired on November 1, 2015.

Carrie Mathison (Claire Danes) gets closer to the answer to who wants her dead. At the same time, Peter Quinn's (Rupert Friend) condition is deteriorating, so she enlists the help of Jonas Hollander (Alexander Fehling). Meanwhile, Allison Carr (Miranda Otto) pursues a devious plan and Numan (Atheer Adel) triggers a demonstration outside the Russian embassy.

Allison tells Dar Adal that she can no longer stop the Swiss police from starting their investigation. Her theory is that one of the employees in Switzerland involved in Youssef's daughter's operation is responsible for the accident. However, Dar Adal notes that the plane's explosion could also have been planned from Berlin or Langley.

Carrie seeks out Astrid in a parking garage, not knowing who else to trust. She shows her the photo of the man who shot Quinn and explains that it is related to the people who want her dead. Then they talk about Quinn and Astrid demands to be allowed to see him, which Carrie doesn't agree to. Astrid still wants to help her for Quinn's sake and keeps the photo of the man with her. Quinn is looking at his gunshot wound in the mirror when Carrie comes back. With his pain increasing, Carrie calls Jonas, whose sister is a doctor and can get him some medication.

Human approaches a woman in the strip club who tells him that the police are already looking for Korzenik. Numan asks her if she knows a man from the Russian embassy who has regularly used Katja's services. The woman confirms this and, using a surveillance video from the brothel, they look for footage of the Russian, Boris. Numan then records a video in which he asks the people to go to the Russian embassy in the afternoon of the following day and ask for answers about the horrific murder of Katja.

Meanwhile, Jonas arrives at Carrie and Quinn's. To lure him here, Carrie told him she was hurt herself. When Jonas realizes that this isn't true, he angrily tells her that after days of radio silence, she can't expect him to help her. Nonetheless, he gives her the antibiotics for Quinn.

Saul and Allison have now left Geneva. Allison suspects that Israel is behind the attack, but Saul doesn't believe it. Finally she drops him off in front of his hotel and the two kiss goodbye. Meanwhile, Carrie and Jonas patched up Quinn. Jonas challenges her to find a way to put an end to everything dangerous in her life since he is not ready to lose her.

Allison meets with Ivan, the man who met with Korzenik. She tells him that she got a call from Vasily's cell phone, but it wasn't Vasily on the other end of the line. Ivan is far more relaxed about this than Allison, who fears that Saul will now find out that she was the one who put Carrie's name in the locker. However, Ivan tells her to calm down, as the trail will not lead to her, but probably only to the SVR, the Russian secret service. Then he shows her a photo of the dead Carrie. Allison is at her wits end, so Ivan takes her hand and encourages her since they're almost there. Now they just want to turn Dar Adal against Saul. As Ivan is about to leave, Allison asks him to keep her company for a little longer.

The next day, Allison receives a visit from Dar Adal in her office. He tells her that the bomb has been investigated and is identical to the bombs Israel is using on Iran. Since Saul and Allison were invited to dinner at Etai's the day before and he knows that the two have been friends for a long time, he cannot ignore the suspicion that Saul is involved in the attack. He therefore asks Allison to have Saul guarded. Meanwhile, he creates a list of people from Langley who were involved in the operation. Allison interrupts him and, as agreed with Ivan the night before, shows him the passenger list of a flight from Berlin to Geneva, on which Etai's name can also be found. This means that he was in Geneva the day before the attack. Saul asks her to keep this to herself and leave out Dar Adal for now.

Meanwhile, Saul has visited Etai and asks him what he had to do in Switzerland. He asserts that there is no connection between his stay in Switzerland and Youssef's death. While they are talking, they do not notice how they are being photographed.

In front of the Russian embassy, ​​Laura tries to find out if the hacker is also there. Meanwhile, Carrie buys a mask from one of the protesters to remain anonymous. However, when she sees the police preparing to stop the protest, she calls and warns Laura. She invites them to a meeting at Ostbahnhof. Shortly thereafter, the police actually intervened in the demonstration. At the train station, Carrie asks Laura about the hacker and the rest of the documents. However, Laura has to tell her that she doesn't have them, but that they were sold to the Russian Embassy by Korzenik. Carrie is desperate, but Laura notes that the files must still be on the CIA's server and all hope is not lost.

Allison shows Dar Adal the photos of Saul and Etai's conversation. She notes that the conversation could also be about a completely different topic than the attack. Meanwhile, Jonas wants to get help because Quinn is getting worse and worse. But the latter makes it incomprehensibly clear that he doesn't want this because it would put Carrie in danger. At that moment, Jonas receives a call from Carrie, who tells him that she will be on the road longer because Laura does not have the documents. Jonas fills them in on Quinn's critical condition, and Carrie agrees to let him call 911. Meanwhile, Quinn has left his bed and is hiding until Jonas goes outside the building to look for him. Later, Quinn sits by the river and tries to attach himself to a heavy rock with zip ties. An Arab passes by who sees it as his God-given task to stop Quinn from committing suicide and get him to a hospital.

In his hotel room, Saul finds an envelope containing chewing gum. He then leaves the hotel via a back entrance, where Carrie is already waiting for him in a taxi. Meanwhile, Quinn, wanting to be left alone, runs away despite the severe pain. However, his attempt to hide in a garbage can fails due to a lack of strength and so he finally collapses. The man followed him. 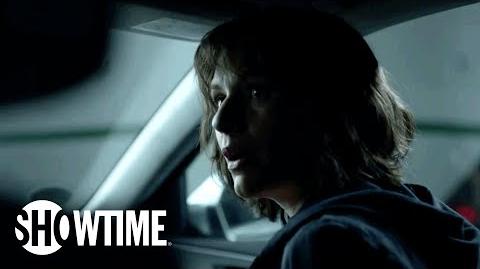 Homeland Next on Episode 5 Season 5