Enemy of the State

THERE'S A VAST GOVERNMENT CONSPIRACY, AND YOU'RE THE ONLY PERSON WHO COULD BRING IT TO LIGHT!

Enemy of the State is the season premiere of Season 7 of Homeland. It aired on February 11, 2018.

Carrie and Frannie are living with Maggie's family in DC. Saul and the federal employees detained after the attempt on the President-elect's life are in prison. President Keane's administration comes under scrutiny.

Following the aftermath of the newly-inaugurated President Keane's actions, Carrie, who is jobless, and Frannie are living with her sister and her family in DC.  Her brother-in-law Bill works for the Keane administration an both Carrie and niece Josie are highly critical of it. Saul and several employees are in prison, having being detained after the failed assassination attempt.

Elsewhere, Keane storms into General McClendon's sentencing hearing and demands that he be executed for the attempt on her life. Although the jury ruled that General McClendon be dishonorably discharged following the incident and sent to prison for the remainder of his life, Wellington advises her to pull back with an iron fist but it is not enough for Keane who demands that he 'fix' the sentence.

Since the failed assassination attempt, Brett O'Keefe's ant-Keane broadcasts have gone underground due to a warrant for his arrest having been issued the day after the incident, which he had labeled a hoax and he is trying to continue on from where he left off. Fortunately, he has found a safe haven in a mattress store out of town in line with his Second Admendment rights and is able continue his broadcasts.  Brett does not stop laying it on, embellishing things a bit by saying that Keane called for a firing squad but that she overstepped and was unprofessional by calling for the head of a once-respected military figure.

Later that night, as Brett and his assistant Sharon eat and chat she tells him that she is done being on the run.  A month has passed and she is tired, both in herself and with his advances.  Just then, the police arrive but the two of them manage to escape with their gear.  However, when they are cornered behind the mattress store the police save Brett only.  They tell him they are there to make sure he gets away and he does after convincing Sharon to stay.

Meanwhile, Carrie lies to Maggie by saying she has a job interview lined up with a think tank when in reality she she spends all day trying to set up a meeting with an anonymous source who is a federal employee. He says he is trying to interrogate the suspects that Keane locked up and needs someone on the record to push forward actions on Keane and to also implicate Wellington so that federal employees with stop going to prison. She heads to a restaurant where she meets Senator Scott Paley and checks in a backpack and leaves her pickup number pinned to a bulletin board. The backpack is then collected by Max.

Carrie then heads to a hotel and makes an impression at the front desk before heading to a room and disguising herself in new clothing and a brown wig. Heading to another hotel, she prepares a suite and waits in the lobby for her source. When he arrives and heads for the suite, she notices that he is being followed and creates a diversion by convincing staff at the reception desk that the man exposed himself to her outside the ladies' room. This gives her time to rush up to the suite to whisk her source away as soon as she can. She convinces Senator Paley to get in the trunk of her car but also watches the elevator, second guessing what she should do. She phones Josie who hands her the keys to Maggie's office and promises not to speak a word of this to anyone but she also sees Carrie letting Senator Paley out of the trunk.

AGENT: I ​​found the hideout.

AGENT: What the fuck?!

CARRIE: What did you bring?

AGENT: Nothing! You said not to bring a phone, or a wallet, anything but the disposable cell phone you gave me.

AGENT: Everything is in the car, which is there in the office. I came on foot.

CARRIE: And the disposable cell phone? Did you leave it on your desk? At work? Did you take off your jacket to go to […]?

In a hotel room, Carrie then reveals her source - a former colleague from Afghanistan called Dante Allen, who wants her to go on the record. He is disgusted to learn that she had not already mentioned that she had told Senator Paley that he would be willing to be named and when the latter arrives and he is not happy to find Carrie flustered with Dante, who is trying to leave. Carrie pleads with the latter, blocking his exit, but he pushes her aside and Paley is shocked to see Carrie curled up on the floor.

When Carrie gets home, she comes face-to-face with Bill and Maggie, who are furious with her. Her mission to get Josie to give her Maggie's keys meant that the kids were left in danger and Frannie was cared by Josie's friend Jason. Bill is angrier and when he leaves the room the sisters argue and Maggie refuses to believe that there is a government conspiracy that Carrie must take care of while unemployed and a guest in her house. Carrie tries to plead her case but Maggie argues that her sister is ummployed, has credit card debts of $38,000 and in over her head. Carries tries to say that she has been sleeping well, taking her meds and exercising but cries when Maggie tells her that she put the kids in danger.

Discouraged by Keane's response to his advice, Wellington visits Saul in prison to offer him the position of National Security Advisor. Wellington tells him that Keane's vulnerability and isolation has made her more ruthless. When Saul requests not only direct access to Keane but freedom for everyone for all of the government people imprisioned Wellington knows that Keane will never sign off on it. Saul then refuses so Wellington heads home, exhausted and dejected only to find that Keane has requested that a security team sweep it for bugs. Annoyed, he forces everyone out, including Max who has brought Carrie's bag with him.

Wellington switches on the news to see a report about McClendon being taken to prison. Carrie receives a message from Max, who tells her that they managed to install cameras before Wellington returned and she turns on her laptop to monitor proceedings.

At the prison, McClendon is told to remove his clothes and is examined. By the time he pulls up his pants, he starts to choke and is soon writhing on the floor with no one to come to his assistance. One of the guards who examined him watches on camera as McClendon dies and disposes of his rubber gloves in a plastic bag, ready to destroy them.

Dante is an FBI agent who has spent several years in counterterrorism abroad. He met Queen Drone in Kabul sometime before season 4, as in 'Enemy of the State', Carrie supported an operation in which he located number four on the wanted terrorist list.

"Congratulations! Our country is now officially in the shitter!”

"You’re not hearing! It would be the end of my career…”- Dante

Listen. Four years ago, a guy came into my office, ordered two Humvess, satellite cell phone and 48 hours later located number three on our wanted list. - account of how Carrie knew Dante before the first episode of Season 4. (The Drone Queen)

"As the episode’s opening shots of a wild-eyed Carrie rage-exercising to a furious jazz crescendo suggest, she’s still dealing with feelings of guilt and betrayal after being used by the Keane administration. While she tells Maggie she has a job interview at the Brookings Institute, that’s just a cover for Carrie doing what she does best: spy shit!” – Scott Van Doviak

“As the episode’s opening shots of a wild-eyed Carrie rage-exercising to a furious jazz crescendo suggest, she’s still dealing with feelings of guilt and betrayal after being used by the Keane administration.” [x]

- Wellington, who is her chief of staff, is not a suspect. Everyone knows that McClendon and Dar were the masterminds. That’s why they were arrested in the first “wave.” The next “wave” was the arrest of 200 other government employees who had no apparent connection and seemed to be arrested only as a show of force/power from Keane, who, as you say is feeling friendless (and vulnerable). These were also the people whom Carrie promised (on Keane’s words) would not be arrested. This is when Saul was arrested and that’s when season six concluded.

Carrie recruited Max to install cameras in Wellington’s house (as a part of a routine bug sweep, ordered by the increasingly paranoid Keane) because she believes he’s the key to uncovering some sort of evidence that could lead to those 200 people being released.

- Dar Adal / McClendon Brett O’Keefe:  All of them are part of the “Deep State Death Trio.” All of them participated in a set of events that left blood on their hands and turned Keane into the fascist, paranoid, and isolated President she has become.

O’Keefe is still on the run - will he end up in front of a jury and have his shot at due process? We (the audience) don’t know if Dar has been sentenced or not - it hasn’t been addressed on the show yet.  As far as we know, McClendon is the first of the three to go through the legal system.

A panel of McClendon’s peers decided against a sentence of death for him, and instead chose to dishonorably discharge him from the military, strip him of his rank, and sentence him to life in prison. They obviously didn’t think he deserved to die and definitely not in the way he was killed.

With Saul getting out of prison and ascending to a position of power, I’m sure we’ll be seeing Dar sooner rather than later. I’m interested to see how Quinn’s death has affected him and if he had any part in McClendon’s murder.

Someone was definitely making an example of out McClendon - the mystery is who?  McClendon seems to have more enemies than friends at this point (Keane, Dar, and Carrie for starters). 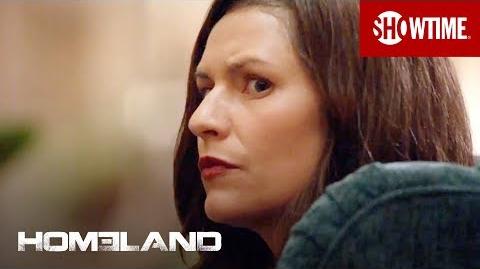 Next on Episode 1 Homeland Season 7