Fair Game is the season premiere of Season 6 of Homeland. It aired on January 15, 2017.

Six months after the events of season 5, Carrie Mathison and her daughter Franny live in Brooklyn, where Carrie campaigns for the rights of Muslim Americans. Meanwhile, Dar Adal and Saul Berenson are in charge of briefing newly elected President Elizabeth Keane. Meanwhile, Peter Quinn is struggling to come to terms with his condition.

Carrie goes to the hospital's physical department to look for Quinn, but the therapist in charge tells her that Quinn didn't show up for physical therapy. Instead, Carrie finds him in the hallway. She tries to convince him to believe in his recovery, but Quinn is certain that he will make no more progress. A nurse then strikes up a conversation with Carrie and tells her that her daily visits keep Quinn upset and that she should leave him alone for now.

Saul and Dar Adal are invited to speak with newly elected President Elizabeth Keane. They talk to her about the conflict in Syria, and she brings up the idea of ​​sending all the troops home since the war seems hopeless. However, Saul and Dar make it clear that it is important to continue fighting ISIS. They then talk to her about the secret operations of the CIA, even if Keane is not allowed to make any decisions before officially taking office. She is particularly interested in the use of drones and military operations.

Sekou Bah opens up with his mother about his sister, who no longer prays regularly and, in his opinion, dresses too revealingly in public. After saying goodbye, he gets into an acquaintance's car, who drives him to a hotel. There they shoot a video in which Sekou talks about the fact that the founder of a Jewish community was killed by al-Qaeda in that hotel.

Carrie is back at the office to attend a meeting and is surprised to find Otto Düring. He explains to her that he landed in Brooklyn, Carrie's new home, that morning. He seeks a one-to-one conversation with her and tries to convince her that her current job as a lawyer for Muslim Americans is hardly satisfying and that she should rather concentrate on the big problems of the world. Carrie, however, cannot be persuaded.

Otto's brief visit shows just how indecisive Carrie really is. She immediately disdained Otto because she didn't see satisfaction in a relationship with him. Otto then tells her that he has a new partner. But when he declared that he had a new partner, jealousy was evident. Carrie probably envies others because they can develop further. Before he leaves, he hands her a present for Franny.

Meanwhile, Quinn enlists the help of a hospital orderly to secretly sneak out of the building. Together they get in the car with a woman named Clarice.

After talking to the President, Dar and Saul talk about what happened. Dar is shocked that Keane plans to demilitarize the CIA. He suspects she is doing this out of grief over the death of her son, who died in Iraq, and she now blames the CIA for it.

Meanwhile, Sekou tells his friend that at the end of the week he will be traveling to Africa, where his father lives, whom he hasn't seen in years. Then they record another video with Sekou telling about Faisal Shazad. He wanted to ignite a bomb at the location near Times Square out of anger at Americans who had killed innocent Muslims.

Quinn has raised money and is now alone with Clarice, who, despite his unstable condition, allows himself to be driven by car. He later spends his money on drugs with Clarice.

Dar Adal meets with a woman named Tova, who he orders not to write anything about her upcoming meeting with Misha Gavron. He also tells her that they only have a little time left as Keane is due to take office in eight weeks and she will probably tie their hands.

When Carrie gets home, the first thing she does is check on her daughter, who is being looked after by Latisha, the nanny. Meanwhile, Quinn has fun with Clarice's girlfriend Justine. When a man named Tommy arrives, he immediately draws his gun at the sight of Quinn, but Clarice tells him to put it away and they take him to another room.

When Sekou is brought home by his friend, he tells him that he knows someone who would like to talk to Sekou. However, Sekou immediately refuses, as his website, on which he publishes the videos he has recorded, is becoming more and more popular and he therefore wants to avoid contact with strangers.

Later, Tommy points his gun at Quinn and demands his cash. Quinn is completely beside himself and fails to reach for his money, so Tommy finally knocks him unconscious and takes the money from Quinn's pocket himself.

Meanwhile, the FBI shows up at the Bahs and arrests Sekou on suspicion of terrorism, much to the horror of his mother and sister. When the FBI agent responsible, Ray Conlin, wants to question the two women, they insist on a lawyer. They are then asked to leave the apartment because a search warrant has been issued.

The next day, Carrie and her boss, Reda Hashem, take on Sekou Bah's case. He does not want to accept that he now has to spend several days in prison, but Hashem makes it clear to him that through his videos he could incite other people to commit violence against Americans. Later, Carrie listens to Ray Conlin's press conference and then talks to him about Sekou's arrest. Conlin explains that they found plane tickets to Nigeria in Sekou's room, along with several thousand dollars, leading her to wonder where he got that much money from.

Carrie later learns that Quinn has been missing from the hospital for an indefinite period. Carrie is upset and tries to talk to Clarence, who helped Quinn escape. A short time later, she finds Quinn in Clarice's bed with a wound on his head. Even though he doesn't want to at first, Carrie takes him back to the hospital. Before they say goodbye, she tries to figure out what she can do to help him, but Quinn refuses to engage in conversation. After looking around the hospital, he decides to leave it again. Carrie tries to stop him, whereupon two security guards rush to her aid and take Quinn by force. However, noticing that he is in pain, Carrie tells the men to let him go.

Saul talks to Senator Elian Coto about the new president. Coto is intent on remaining vigilant about terrorism, even though Keane says it's a waste of money. Saul, on the other hand, is less critical of the situation, as he believes that Keane can still change his mind on a few points.

Carrie has decided to let Quinn move into the apartment below her. He insists on paying the cost himself. Carrie tells him to behave properly and not do drugs again.

While Sekou is praying in his cell that evening, Elizabeth Keane takes off her necklace and looks at the pendant on it. Meanwhile, Quinn tries to leave the apartment, but it's locked. The senator, meanwhile, meets with Dar Adal without Saul present.

Brian Tallerico of New York Magazine rated the episode 4 out of 5 stars, saying it had "a pleasantly slow pace... it's an interesting tone-setter for a show that can often be detrimentally hyperactive". In praise of the episode's scenery, Tallerico wrote "The premiere used New York City beautifully, especially in the bustling background behind Sekou's videos"

Matt Brennan of Paste reviewed it positively, calling it "uneventful", but stating "despite its dearth of narrative fireworks, tonight’s episode succeeds in setting the table for such developments on two distinct fronts".

Rupert Friend was named "Performer of the Week" by TVLine for his performance; they wrote "it’s a credit to Friend’s raw, riveting performance that he’s making Quinn’s descent so authentic—and tragic".

“What if he’s just opposed to U.S. foreign policy in Muslim countries, like I am, more and more?” Carrie asks the FBI agent (Dominic Fumusa) tasked to Sekou’s case.

“There’s two sides to every story,” as Sekou says into his camera. “Know that.”

Other mistake: Carrie took Finn back to hospital and after he left the car he lifted his left arm up and brushed back his hair. I thought he couldn't move his left arm? 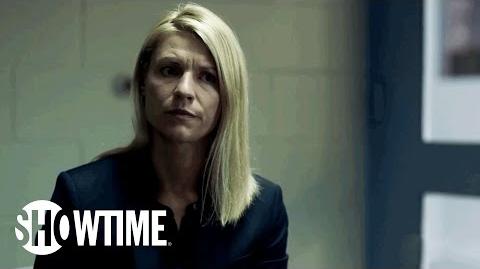 Homeland Next on Episode 1 Season 6