From A to B and Back Again

From A to B and Back Again is the sixth episode of Season 4 of Homeland. It aired on November 2, 2014.

Carrie puts her operation in motion.

At the safehouse, Carrie presents Aayan with his new identity and passport, and tells him of the plan to depart for London that night. Aayan makes one last visit to his dormitory to retrieve some personal effects, but notices a man following him as he leaves. Thinking he has shaken the tail, he returns to the safehouse, but the same man, along with two associates, soon break into the safehouse and go after Aayan. Aayan is able to escape, and watches as Carrie is forcefully thrown into a van and taken away. The kidnapping is revealed to be a ruse concocted by Carrie, with the intent of getting Aayan to seek refuge with his uncle, Haissam Haqqani. Via a tracker that was hidden by Max in his passport, Aayan is located by a drone which relays a visual of his whereabouts to the operations room where Carrie, Quinn, and Redmond observe.

Quinn learns from colleague Alan Hensleigh that Farhad Ghazi wasn't on the plane that landed in Johannesburg, and that all attempts to contact Saul have failed.

Dennis Boyd reports his findings to Tasneem. Following Fara from the Embassy, Dennis learned the location of the safehouse and found Aayan's personal photos inside. He also gives Tasneem the photos of Carrie's medications, surmising that Carrie is "at least bipolar, possibly beyond that".

After calling his uncle, Aayan goes to a secluded location where he is met by a convoy of vehicles containing heavily armed men. Carrie confirms to the drone shooter that if the presence of Haqqani is confirmed, they will fire on the target even though the asset, Aayan, will surely be killed as well. Haqqani emerges from one of the vehicles, but to the shock of those in the operations room, he also has brought Saul Berenson as a hostage. Haqqani tells Aayan that his "friend" has led them into a trap and that there is a drone waiting above to kill them. Haqqani thanks Aayan for the medicines and kisses him, then shoots him in the head, killing him instantly. An increasingly enraged Carrie gives the order to the drone shooter to take the shot anyway. She is talked down by Quinn, and storms out of the operations room as Haqqani and his men drive away with Saul. 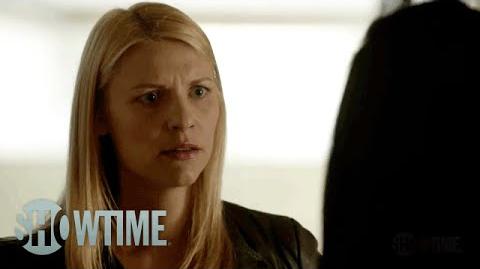 Homeland Next on Episode 6 Season 4