In Memoriam is the eleventh episode of Season 2 of Homeland. It aired on December 9, 2012.

Dangerously close to exhaustion, Carrie continues her hunt for Nazir and begins to suspect there is a mole in the CIA. Roya reveals her true colors under interrogation and Saul finds himself fighting to save his career under unexpected circumstances. Meanwhile, the Brodys maintain anything close to a state of sanity.

Carrie explores the mill in search for Abu Nazir. She sees someone in the building but loses track of him. Continuing to search, she goes through an exit and finds that a slew of CIA and FBI reinforcements have already arrived. Carrie tells Quinn that she spotted Abu Nazir in the building. SWAT teams are sent inside but they do not find anyone. Quinn tells Carrie that Vice President Walden is dead, apparently due to a pacemaker malfunction. Carrie calls Brody, who is at the safehouse with Jessica. Jessica overhears enough of the conversation to know who he is talking to; Brody finds her crying when he gets off the phone with Carrie.

Saul is taken to an interrogation room. Saul angrily calls the interrogation a "farce" and tells the interrogator that the real reason he's there is that he's uncovered a plan to assassinate a U.S. Congressman. Among other things, Saul is interrogated about the circumstances surrounding Aileen Morgan's death, and whether Saul supplied her with the suicide weapon (his glasses).

Carrie tells Quinn that if Abu Nazir somehow got away with so many personnel surrounding the building, then he must have had help from someone working for them. She asks who was directing the search; Quinn replies that it was himself, along with Galvez. They then learn that Galvez recently left the area. Carrie concludes that Galvez must have smuggled Abu Nazir out of there. They track down Galvez and search his car but find him to be innocent. Galvez explains that he was rushing to the hospital because his stitches had opened up.

Estes presents Saul with the results of the polygraph session. Saul says that he must have been right about Estes' plan to assassinate Brody. Saul reminds Estes that they made a deal with Brody, but Estes replies that they don't make deals with terrorists. Estes says that he wants Saul out of the agency, either on his own terms, or by Estes using the polygraph results to destroy his career.

Carrie attempts to interrogate Roya Hammad. She approaches Roya as someone who has been manipulated by Abu Nazir into doing things that she wouldn't normally do, but this only results in Roya exploding in anger, telling Carrie that "Abu Nazir is not afraid of you" and ranting in Arabic. Afterwards, Carrie is sent home to get some rest, but on the way she recalls Roya saying in Arabic that Abu Nazir would not run, leading her to wonder if he has been holed up in the mill the whole time. She returns to the mill and encounters one remaining SWAT team there; she takes the team back inside. Carrie spots an entry to a hidden room where a sleeping bag is found. Carrie goes to retrieve the rest of the SWAT team, but hears a noise and comes back, finding the dead body of the SWAT team member that was accompanying her. Carrie shouts to the rest of the team that Nazir is in the building. Nazir finds Carrie and attacks her but retreats when the SWAT team approaches. They corner Nazir and are forced to kill him when he reaches for his gun. Afterwards, Carrie is commended by Estes for being the driving force behind the capture of Nazir. Estes then privately tells Quinn that he should proceed with killing Brody and that it should be done as soon as possible.

At the safehouse, Brody and his family receive the news that Abu Nazir has been killed and they are free to go home. Brody is overcome with emotion and cries briefly while his family watches in confusion. When they arrive home, Brody stays in the car. When Jessica comes back out to get him, Brody tells her that he can't go in. They are resigned to the fact that their marriage is over and discuss how it went wrong. Brody starts to tell Jessica about what he was planning on the day Elizabeth Gaines was killed, but Jessica stops him, saying that she doesn't need to know the truth anymore.

Brody goes to Carrie's house. They embrace in the doorway as Quinn watches from afar.

* James Urbaniak returns as genial polygraph expert Larry, but unfortunately doesn’t get to stick around to conduct the interview with Saul, replaced by an Estes goon played by Chance Kelly.

* Best example of embracing a cliche: Carrie literally washing the blood off her hands after she told no one about Brody’s role in Walden’s death, or Dana literally crying (or, at least, throwing a tantrum) over spilled milk?

* Oddly, this episode was called “The Motherf–ker with a Turban” for a very long time. Now, though, “In Memoriam.”

* As many others (including Nussbaum and Libby Hill) noted on Twitter, Brody telling Carrie that choosing between her and Walden was no contest isn’t really the compliment he wanted it to be, given how much he despised Walden – and how Carrie knows this. - ALAN SEPINWALL

Mitchell Clawson: [to Estes] He went on this crazy rant about an assassination plot against a U.S. Congressman. The machine said he was telling the truth.

“We just went along – one thing to the next. I think maybe this is a time to stop and think.” -Jessica

Nicholas Brody: Look... all that matters to me right now is that you're safe. 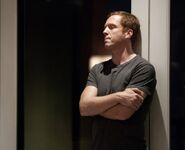