Lies, Amplifiers, F**king Twitter is the eighth episode of Season 7 of Homeland. It aired on April 1, 2018.

Carrie and Saul interrogate a suspect. Wellington makes a play.

Carrie (Claire Danes) drops off Franny at school and goes to the secure site where Saul (Mandy Patinkin) is holding Dante (Morgan Spector). Carrie takes a shot at interrogating Dante but doesn’t get him to break. When Dante asks for a lawyer, Carrie has an idea and tells Saul “let’s give him one.” While this is happening, Franny, still traumatised from the previous night, has to be picked up from school by Maggie (Amy Hargreaves). When Carrie returns home, Maggie says that Carrie’s treatment and neglect of Franny is downright abusive. Maggie issues an ultimatum: Carrie must admit herself to a hospital immediately, or Maggie will seek custody of Franny. Carrie argues at first, but then leaves and goes back to the secure site.

President Keane (Elizabeth Marvel) is pressured to resign by Senator Paley (Dylan Baker) due to the impending testimony of Simone Martin (Sandrine Holt). Keane and Wellington (Linus Roache) decide to lean on Russia via their ambassador (Elya Baskin), with the threat that Martin’s testimony would be considered a “hostile act” against the United States. Leadership in Russia takes the threat seriously, and Yevgeny Gromov (Costa Ronin) is notified that he needs to prevent Martin’s testimony. Gromov tracks down the safehouse where Martin is being held, and his men are able to distract the guards and escape with her. Gromov and Martin embrace and kiss when they are reunited.

Dante’s “lawyer” (actually a man posing as one, directed by Carrie and Saul) has Dante sign some paperwork and leaves. Dante collapses and shows signs of a heart attack. Seeing the ink on his hands, Dante realises he was poisoned the same way that McClendon was and tells Carrie the Russians were responsible, also implicating Simone Martin. Carrie and Saul get the evidence they were seeking, and then attempt to save Dante by giving him an antidote. Dante’s heart temporarily stops and his survival is left in question, which becomes even more crucial to Saul and Carrie when they learn that Martin has escaped, meaning Dante is their only connection to the Russians. 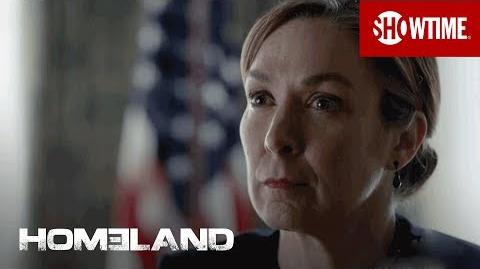 Next on Episode 8 Homeland Season 7