Like Bad at Things is the fourth episode of Season 7 of Homeland. It aired on March 4, 2018.

President Keane (Elizabeth Marvel) is livid when Wellington (Linus Roache) admits to ordering the air strike on her behalf after she refused to do it. Carrie (Claire Danes) witnesses the whole confrontation on her surveillance cameras. Carrie and Max (Maury Sterling) also look into Simone Martin’s movements on the day that McClendon died. By accessing her E-ZPass logs, Max learns that her route took her to five separate cash advance locations.

In the midst of the standoff at Bo Elkins’ compound, his teenaged son, J.J., chases his dog through the woods. He encounters an FBI patrol, who shoot the dog as it rushes towards them. J.J. raises his rifle and is also shot. As the patrollers tend to J.J., they are ambushed by Bo (David Maldonado) and several of his friends. They take J.J. as well as a hostage: Agent Goodman. Two paramedics are permitted into the compound to extract the severely wounded J.J. One of them secretly plants a listening device, enabling the FBI detail to monitor the conversations inside. At the hospital, a man (Costa Ronin) enters and puts on scrubs, posing as a doctor. He sneaks into the room where J.J. is being treated, takes several photos from behind the curtain, and gets away undetected.

Carrie, not wanting to deal with the side effects of Seroquel, buys some black market meds from Josh (Alex Hurt), and asks Dante (Morgan Spector) to help her manage her medication levels. Carrie also proposes to Dante a plan to connect Wellington to Simone Martin’s dealings, but warns that it’s “completely illegal”. Dante agrees to collaborate with her.

On television, a news report breaks that J.J. was left to bleed out and die alone at the hospital. A photo is shown: one of the photos taken by the hospital intruder, with the doctors edited out of the image and blood digitally added. Agent Maslin (Matt Servitto) sees the report and declares that it’s not true, as he had just been in touch with the hospital and learned that J.J. was stable. Saul (Mandy Patinkin) frantically calls O’Keefe (Jake Weber), urging him to relay the truth to the Elkins family, but O’Keefe hesitates. Bo Elkins sees the report on TV. Enraged, he executes Agent Goodman in response. Via the listening device, Maslin hears the gunshot and orders an immediate assault on the compound. A major firefight ensues as O’Keefe hides in the basement. After the battle ends, O’Keefe uneasily walks past the bodies of his fallen allies as he is taken into FBI custody. 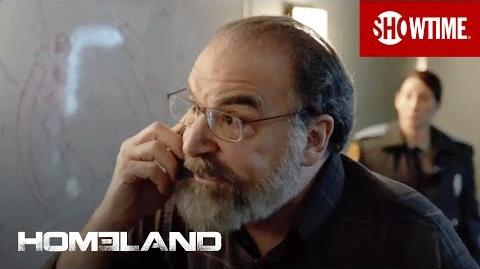 Next on Episode 4 Homeland Season 7