"I AM THE PROBLEM. I DROP EVERYONE AROUND ME. AND I HAVE THIS OPPORTUNITY TO JUST GO AWAY AND TAKE THE PROBLEMS WITH ME.” — MATHISON, CARRIE

Parabiosis is the sixth episode of Season 5 of Homeland. It aired on November 8, 2015.

At a prison, several inmates are released because the evidence against them from the illegal procurement that Laura Sutton exposed is no longer valid. Laura is also there and tries to interview the freedmen, including Hajik Zayd, but they want to be left alone. Hajik is picked up directly by a friend.

Carrie is with Saul at Potsdamer Platz and explains to him that she is on his death list and that the Russians are probably involved. Saul is skeptical and does not see the connection to the secret documents. Carrie would like Saul to give her the secret documents so she can see what's important inside. But Saul doesn't think that's a good idea because Carrie is on the other side. She crossed a line, which disappointed Saul greatly. He no longer trusts her and explains that she shouldn't have risked her life for this meeting.

Hajik is welcomed home by his friends. They all live in the house where Quinn is also recovering. Meanwhile, Saul has gone back to his hotel and realizes that he is being followed. The next day, he meets up with Allison and shows her that a car is following him. Allison admits that Dar Adal ordered it. She tries to explain that because the wreckage found points to Israel and Saul is in contact with them. Saul explains that they should focus on finding bugs that let them know about their plan. However, if they don't find any, they would have an even bigger problem.

Hussein discusses with Hajik whether Peter Quinn is a spy. Hajik tries to wake him up, but Hussein explains that he gave him a sleeping pill for the pain. Hussein quotes treating one's guests well, but Hajik replies that Hussein made him a guest without being asked.

Carrie is back in Peter's lair only to find a frustrated Jonas, who has been waiting for Carrie for a long time. In the meantime he tried to find Quinn again, but he suspects that he hid somewhere to die. Jonas is angry that Carrie wants to solve everything on her own and that the situation is getting worse and worse. But Carrie can't trust anyone. Jonas says that this is not life and that he is leaving now and that she is welcome to come with him. Carrie asks for time to think and wants to say she expected more from Saul, but Jonas doesn't want to hear it. He doesn't want to have anything more to do with all this and leaves. Carrie stays behind sadly.

The CIA checks everything for bugs. When the conference room is deemed clean, Dar Adal and Saul meet there. Dar wants to know who ordered the search. Saul says he did it because he wants to find out who was responsible for the plane crash instead of pointlessly having him monitored. They get into a fight and Dar Adal cannot be convinced by Saul that the Israeli ambassador is not involved. Saul believes that Dar is still blaming him for the mistake he made thirty years ago and is suspicious of it. They argue more and more violently until Dar Adal announces that Saul should take a lie detector test, since Saul also does not want to reveal who gave him the idea that the Russians could be to blame.

Quinn wakes up and walks around the house a bit looking for a bath. There he looks at his wound when he suddenly hears voices. Due to the clairaudience of the building, he notices that Hajik plans to carry out an attack in Germany. But Hajik also hears that Quinn apparently heard him when Hussein takes care of Quinn again.

Saul is in his hotel room, checking for bugs himself. He thinks someone is following him and then searches a maid's car, thinking she may have taken something. When nothing is found, he apologizes and withdraws for the time being.

Carrie is waiting in a dark corner of a parking garage for Otto Düring, who sees her and goes to her. She explains that she is believed to be dead and that she must now disappear. She asks Otto to provide her with a plane, but does not want to reveal the destination. Otto is happy to help, but doesn't see how the plane should do it. Carrie talks about her conversation with Saul, which still bothers her a lot. Then she says that she couldn't take care of Quinn either. She is the problem and simply has to go so as not to harm anyone anymore.

Saul reports for the lie detector test, but then asks for a moment and tries to access some documents. However, his entitlement has been reduced and so he has no access to anything. So Saul causes a bit of a stir and has the servers checked. During the unrest, he sits down at Mills' computer and downloads the documents. But when they look for Saul, he's already gone.

Hussein tends to Quinn's wounds again and they start talking. Hussein and his wife were doctors in their homeland. However, his training was not recognized in Germany, so he now works as a caretaker and collects sick people who he can help from time to time. Hajik's henchman arrives and asks Peter to come along. Hussein wants to defend him, but that doesn't change anything. Quinn is with Hajik shortly after, who is questioning him because he thinks he is a spy. Hussein tries to defend Quinn but is then kicked out. They consider killing Quinn outright rather than philosophizing with him. Quinn explains that they can assume they're being watched by the police, so it's best to keep quiet. Hajik, however, is annoyed by Quinn and gives him a punch as a souvenir.

Mills informs Allison that Saul stole sensitive content. Allison tries to calm things down but can't do much at first. You just have to ensure that the content is distributed completely and correctly.

Saul is on his way to see Otto Düring, whom he tells about the documents Carrie wanted. Saul makes it clear that only Carrie is allowed to see the documents. Then more men from the CIA come and want to take Saul with them. While they find no evidence that Saul exchanged anything, the circumstantial evidence supports it. He is taken away.

Carrie deletes all her contacts from her phone and then looks at pictures of her daughter again, which makes her very sad. With a heavy heart, she erases everything when she is picked up to be driven to the airport. Meanwhile, Quinn is handed some painkillers and then gets ready to leave. One of Hajik's people comes in when Hussein is giving some more advice and wants to know if there's really police surveillance. He is persuaded.

Otto Düring leaves the club where Saul had previously appeared and finds that he has a USB stick in his coat. In the meantime, Carrie doesn't let herself be driven directly to the airport, but gets out again in front of Jonas' apartment. She looks sadly through the window at Jonas doing the housework. Eventually she leaves without speaking to him, let alone that Jonas saw her.

Quinn wants to set off, but Hajik and his people are already waiting for him outside. Hajik and Quinn get into a gun fight and Hajik is about to injure Quinn, but after some back and forth Quinn gets the upper hand and kills Hajik. After that, Hussein tends to his new wounds again. Without Hajik he is now also safe.

Carrie makes her way to the plane, which Otto is already waiting for. When Carrie arrives, he hands her Saul's USB stick and tells Carrie that she can think about what to do next. 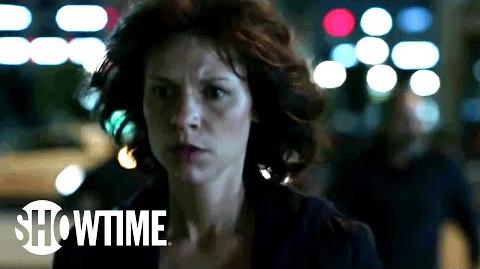 Homeland Next on Episode 6 Season 5