Rebel Rebel is the second episode of Season 7 of Homeland. It aired on February 18, 2018.

Carrie Mathison makes a discovery. Meanwhile, David Wellington is doing everything he can to protect President Elizabeth Keane. Meanwhile, Brett O'Keefe returns to the airwaves.

Brett O'Keefe is back on the air reporting the death of General McClendon. He thinks it is extremely strange that a general in his good physical condition should suddenly have had a heart attack. Rather, he reveals that the jailer responsible for McClendon's security used to live in the same neighborhood as Chief of Staff David Wellington. O'Keefe is convinced that this is no coincidence.

At the White House, President Keane asks her advisers how McClendon's death came about. She herself doesn't believe that his health was so bad and asks what is behind O'Keefe's allegations. The advisers don't know and Wellington explains that this is bullshit. A little later he made it clear that the subject had to be changed in order to mitigate public criticism. He brings up Saul and the other 200 detainees and explains that most of them were not remotely involved in the conspiracy. As long as they are in custody, you will have no friends and not just O'Keefe as an opponent.

O'Keefe is having a party in the small community where he is currently taking shelter. The people there love him. One young man even got O'Keefe's likeness tattooed on his upper arm.

Carrie is with her psychiatrist trying to explain what she did. She realizes she shouldn't have dragged her niece into this and promises never to do anything like it again. The therapist confronts Carrie about the debt and admits that she has spoken to Maggie, who is worried and also explained that Carrie has lost her best friend. Carrie replies that Quinn would have understood what she was doing. He never let her down. The therapist asks how it all sounds to Carrie when she explains that her country is under attack and that she has sworn to protect it. Carrie says it sounds true to her and that if that's what she wanted to do, she's taking her meds. The therapist explains that there is a small number of people for whom the pills stop working after a certain period of time.

Wellington is back in prison with Saul and declares that the President accepts his terms. However, Saul is not interested because he believes that after McClendon's death he should only be used as a shield. Wellington says he doesn't believe Keane had McClendon killed. They want Saul as a reliable and trustworthy partner. They want to look ahead and bring the country forward again. Saul thinks.

Carrie comes home and looks at the surveillance of Wellington's house. She notices a woman in the apartment. Meanwhile, Saul is at large and in the White House with the President preparing for a press conference. Saul assures Keane that it was only a very small group of people who supported the assassination attempt against Keane. He himself was in the first car and had to undergo a long operation.

Carrie sees the woman writing a note for Wellington, but can't make out what it says. Carrie takes a screenshot of the woman and sends the picture to Dante to help identify her. When the two talk on the phone, he emphatically states that he doesn't want to hear from her anymore and that he won't help her now either. Maggie comes home and invites Carrie into the living room where the President's address is shown. She is just explaining that she wants to look ahead again with the country and that is why she released the 200 prisoners and that Saul will be her new national security adviser. Carrie is surprised and perplexed and tries to reconcile this with her worldview.

Keane thanks Saul for making the first appearance, then lets her chief of staff in to explain Saul's next steps. Wellington explains that they want to stabilize security in the country by finding and apprehending Brett O'Keefe. Saul doesn't like it, but Wellington explains that she doesn't have the impression that the FBI is working on her behalf and that Saul is trusted.

Carrie says goodnight to her daughter, who explains that she likes it very much at Maggie's and wants to stay here, but is worried because Carrie fights with Uncle Bill all the time. Carrie apologizes and states that while she will mend her ways, they will not leave her family. A little depressed, Carrie goes to her room and lies down. She then opens her laptop and surfs to anti-Keane sites. She decides to post on one of the pages in Picture of the woman from Wellington's house and hopes for a reply.

The next day, when Carrie wakes up, she sees that someone has replied to her post. She contacts him and has a file sent to him. She clicks on it, which infects her laptop with a virus and demands $5,000 from her. She closes the laptop first and goes downstairs for breakfast. Maggie asks if she can look after the kids, but Carrie claims to have an online job interview. So Franny has to get ready immediately so that Maggie can do it again. Carrie says goodbye to her quickly and then goes back upstairs. She opens the laptop and curses.

Brett O'Keefe has the small community take him to the shooting range where they show what they can do. After all, O'Keefe should also put his skills to the test. He tries to talk his way out of it, but he can't get around it. He shoots but underestimates the recoil and injures his head.

Carrie has called Max who tries to get her laptop working again but fails. He explains that he cannot help her. You just have to pay the money. As they discuss what to do, a voice suddenly speaks to them. The sum has doubled to $10,000 and Max should go. Carrie is now trying to use her voice to talk. She has no money, but the voice explains that she will think of something. Then he says goodbye and the laptop goes black.

Senator Paley is with the President. They talk about the situation in his state, in which there are citizen patrols and the president is not particularly popular, also because of Paley's statements. He admits to having exaggerated a bit. Keane then demands that Paley drop his investigation because they released everyone. Paley explains that they were still illegally detained. He's also investigating things like McClendon's unexpected death shortly after Keane's appeal for the death penalty. Wellington says Paley could use the support of the White House in his state's upcoming election. However, he is not intimidated and says that he is probably not the one who will be without a job after the elections.

Carrie watches herself in the mirror, then makes a decision. She opens the laptop and tries to reach her blackmailer. The laptop now flashes $20,000 as a ransom because the other person found out that Carrie was monitoring Wellington. She tries to explain that with Wellington he doesn't have anything against her. He believes her excuses, but makes it clear that he still has her hard drive. Carrie says she still can't pay. She takes a cover off her laptop camera and reveals herself. She teasingly tells him that maybe she could offer him something else in exchange. She opens her blouse and takes it off, then takes off her bra as well. The blackmailer wants Carrie to continue, but she stops and says she wants to meet him first.

Saul is in town at the store where Brett O'Keefe filmed one of his last shows and then escaped. The FBI is very present, but there is a large mob of people who are behaving in an insurgent manner. Saul is met by the ailing FBI agent, who explains that local police appeared to have helped O'Keefe escape. Two of the police officers are in custody. Saul demands that they be given a drink and then separated.

O'Keefe's assistant tends to his wound, then explains that, like I said, she wants to quit. O'Keefe says she has a bed and a shower now. But she replies that she thinks people are crazy. O'Keefe says she has to protect him from the loonies when J.J., the young man with the tattoo, announces that dinner is ready. O'Keefe goes after him and explains that all he had to do was repeat after his girlfriend and that he didn't think she was anything but crazy. He is proud to be able to fight alongside him and his father.

Saul questions one of the police officers and explains that the mood in the country, where people are rebelling against authority, is not good and that it must be stopped, otherwise they are no longer serving the protection of the country. He should tell him where to find O'Keefe. He will then go to him alone and talk to him, he gives his word.

Carrie drove into an industrial area where the blackmailer navigated her over the phone. She is supposed to get out and take off her jacket and then start walking in the opposite direction to the direction of travel. Meanwhile, Saul makes it clear to the senior FBI agent that they are continuing on his terms because his previous line is unacceptable. He will go to O'Keefe alone.

Carrie enters a large warehouse at her behest, through which she still has to walk a bit. She is finally able to put the phone down and shortly thereafter faces her blackmailer. She's supposed to take off her shirt, but she wants her PC unlocked first. But he doesn't agree. Carrie tries to open her shirt, but then explains that it's stuck. She lets him come to her. She takes his hands, runs them over her body and then headbutts him. A brief fight ensues, in which Carrie has the upper hand. She hits him several times with a baton, then retrieves the laptop and forces him to unlock her laptop again. She films him with her cell phone. He unlocks Carrie's laptop and then begs her to leave him alone. But Carrie hits him again, chokes him and threatens to kill him if he gets in her way again. Then she takes his laptop and hastily leaves the scene. 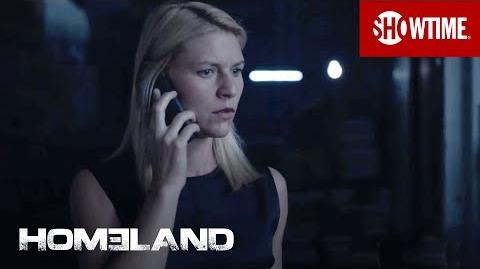 Next on Episode 2 Homeland Season 7