Redux is the seventh episode of Season 4 of Homeland. It aired on November 9, 2014.

With the news that Saul Berenson has been abducted, CIA Director Andrew Lockhart arrives in Pakistan. Lockhart, Martha Boyd, Carrie, and other representatives from the U.S. Embassy meet with a delegation of Pakistani intelligence officials. Lockhart accuses the ISI of being complicit with Haqqani, and declares that the U.S. will suspend their federal aid to Pakistan if Saul is not returned safely. Martha, appalled that Lockhart undermined her and potentially sabotaged her working relationships, nearly resigns as ambassador, but Dennis convinces her to reconsider. Martha starts reaching out to her contacts in an effort to secure Saul's return.

Haissan Haqqani  boasts to Saul that he can now move around the country freely without fear of drone strikes, due to the presence of Saul as a "human shield". Haqqani visits his wife and children, who he hasn't seen in three years, with Saul in tow.

At a pharmacy, Tasneem picks up some pills that have been filled with an unidentified powder. Dennis breaks into Carrie's apartment and replaces her Clozapine pills with the pills that Tasneem acquired. Later on, Carrie takes the false pills and soon begins to suffer the effects. After lashing out in the operations room, she realizes something is wrong and retires to her room for a nap.

Saul is taken to a dwelling near the Afghanistan border, where Haqqani informs him that his release is currently being negotiated in exchange for several prisoners.

Carrie is awakened by a call from Max, who has located Aayan's girlfriend Kiran. Not feeling any relief from her pills, Carrie takes more. Becoming increasingly paranoid and hallucinating, she heads to the hospital where Kiran is working. Carrie asks Kiran the purpose of the medicine Aayan was retrieving for Haqqani, but only repels her with her overly aggressive questioning. A security guard tries to restrain Carrie, but, while hallucinating that he is Quinn, she attacks him and runs into the streets. Carrie shoots two men who approach her before turning her gun on the police, but then realizes she's not even holding a gun. The police apprehend her and deliver her to a house where she is greeted by Nicholas Brody. Carrie is shocked that Brody is alive and initially doesn't trust what she's seeing. After an emotional reunion, it is revealed that it's been another hallucination, and Carrie is actually crying in the arms of ISI colonel Aasar Khan, who is asking her "Who's Brody?" 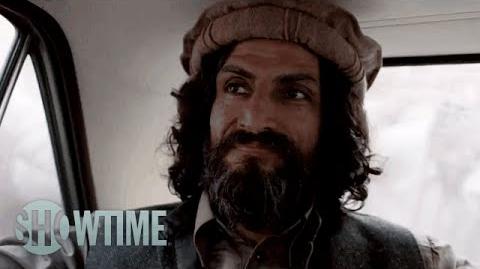 Homeland Next on Episode 7 Season 4