Separation Anxiety is the season premiere of Season 5 of Homeland.  It aired on October 4, 2015.

Carrie Mathison left the CIA behind after the events in Islamabad and started a new life in Berlin. When her boss Otto Düring wants to travel with her to a refugee camp in Syria, Carrie is confronted with her old life again. Meanwhile, Saul Berenson must deal with a hacker attack in which sensitive CIA data was stolen. Meanwhile, Peter Quinn returns from Syria after two years.

Carrie attends a Catholic service in Germany and prays. Meanwhile, a man arrives at the Berlin train station and makes his way to a brothel. In a back room is an office where he meets another man. The two made a fun video of Arabs and upload it to a website they hacked into. Then suddenly someone from the CIA in Berlin tries to communicate with them. The man quickly discovers that it must be a government and wants to remain anonymous. He manages to hack into the CIA's system, after which files are transferred. The CIA immediately shut down all equipment to prevent further damage.

Carrie takes her daughter's birthday to kindergarten and says goodbye to her. Then she goes to her new job, the Düring Foundation, where she is introduced to a Lebanese ambassador. Afterwards, their boss, Otto Düring, tells Carrie that they will travel to Lebanon in three days because ISIS is reuniting there in the city of Raqqa to take action against the Syrian government. There is now a crisis at the border with the numerous refugees, which is why Düring wants to visit a camp there. Carrie doesn't think much of this idea because they can't take the necessary security precautions, but her boss won't be dissuaded from his plan.

Meanwhile, in Langley, Quinn recounts his experiences in Syria, where he has spent the last two years. The men who sit with him at the table doubt that the work should continue as before, since it is getting nowhere. Quinn replies that it's because they don't have a strategy, unlike ISIS, which follows the Koran and strives for a world free of people they see as infidels. In order to counteract this, in his opinion, more radical things must be done than are currently being initiated by the CIA. When he finally leaves the room, Saul and Dar Adal are talking about Quinn's behavior. Dar Adal is concerned that he has become so abusive, but Saul understands that he has been in the war zone for the last two years. Then he receives a message about the hacker attack in Berlin.

At Franny's birthday party, Carrie kisses her boyfriend, Jonas Hollander, who also works for the Düring Foundation. They talk about the upcoming trip to Lebanon, which Carrie is still not enthusiastic about. Then she is visited by a woman who tells Carrie that she has received a document from a hacker that contains information about a secret and at the same time illegal agreement between the German and American secret services. The German secret service circumvents personal rights by letting the American secret service spy on them. Before she releases the document, she wants Carrie to verify it. But she refuses because it violates her agreement with the CIA.

In the evening, Carrie puts Franny to bed and bids her good night. She then talks to Jonas about the day that brought her back to her old world, which she actually wanted to leave behind when she left the CIA. Jonas makes it clear to her that she doesn't have to verify the document or go to Lebanon if she doesn't want to. Then the two kiss... and make love.

The next day, Carrie visits her old colleague Allison at the CIA in Berlin and talks to her about the planned trip to Lebanon. She asks for information about the situation there, which Allison refuses to give her in detail as long as Carrie does not give her information about current events at the Düring Foundation in return. Then she brushes Carrie off and finally explains to her that Saul is about to come, with whom Carrie hasn't had any contact for a long time. In the entrance hall, however, Carrie meets Saul and realizes after a few seconds that he is still mad at her. He explains that it's okay that she left the CIA, but for him the Düring Foundation is something like the opponent of the CIA. He calls her naive and stupid because she works there and for right. He then ends the conversation and leaves her standing.

Saul is told that the hacker has obtained more than 1,300 CIA files showing their cooperation with Germany. He immediately demands a meeting with the German secret service. At the same time, Carrie meets with a man named Sheik Hafiz and informs him about the upcoming trip to Lebanon. She demands a conversation with Al-Amin, the leader of the Lebanese militia Hezbollah, who lives underground in Berlin. Sheik Hafiz replies that he doesn't know Al-Amin, but Carrie still asks him to pass the message on as it will surely get there.

Saul and Allison meet with the Germans to inform them of the data theft. Saul suggests that they continue to work together, as German law would otherwise tie their hands in exposing terrorists. But his counterpart refuses and says at the end that he regrets having trusted the CIA. His colleague also says goodbye and advises Saul and Allison not to leave a trace of what they are planning. In the meantime, Quinn has also arrived in Berlin and is walking through the city centre.

Carrie is back in the church. When she leaves, she is attacked by some men and tied to a chair in a dark underpass. Meanwhile, Quinn breaks into an apartment and knocks the owner unconscious when he returns home. Carrie is told by her kidnapper, Al-Amin, that he was a supporter of Abu Nazir and that two of his men were killed by the CIA under Carrie's leadership. Carrie asks him to ensure that Otto Düring is officially invited to the refugee camp so that he can have a safe journey. Al-Amin replies that she killed his son in Beirut and she will be his opponent forever. He then leaves, not giving Carrie a chance to justify herself.

Meanwhile, Quinn has planted a bomb in the man's apartment, who is now conscious but has been tied up and unable to speak. Quinn times the bomb to two minutes and then leaves the man alone in the apartment. When he's across the street, the bomb explodes.

Laura discusses the article about the cooperation between Germany and America with Jonas. Jonas comments that maybe they should wait before posting and Laura immediately replies that he's only saying that because of Carrie. At the same moment, her kidnappers throw her out of the car in front of her front door. While Laura posts the article, Jonas asks Carrie what happened.

Meanwhile, Quinn meets with Saul, who informs him that they will no longer be in contact and that he will no longer have any support from the CIA. Quinn's job is to kill people, for which he will be paid a sum of money if he brings proof of the deaths of the respective people. The next target is a woman who recruits Syrian children and youth for the war. Quinn agrees and agrees with Saul that he will kill anyone whose name Saul leaves in a locker for which they both have a key.

Carrie is in bed with Jonas and Franny when she gets a call from an anonymous number. It is Al-Amin who informs her that Otto Düring has been officially invited to the camp.

They call it the end times. What do you think the beheadings are about? The crucifixions in diya heifer and the revival of slavery. You think they make this shit up? It's all in the book. Their fuckin' book. The only book they ever read. They read it all the time, they never stop. They're there for one reason and one reason only, to dir for the caliphate and usher in a world without infidels. That's their strategy, and it's been that way since the seventh century, so do you really think that a few special forces teams are going to put a dent in that? - Quinn

In the hallway, Dar admits to Saul, “I’m worried about Quinn.”

Saul: "What are you atoning for?"

Saul: "You're being naïve and stupid—something you never were before."

There’s a line between us that you drew. Forget that. It’s a fucking wall - Saul to Carrie

"It's like my old life came back." - Carrie laments to Jonas, 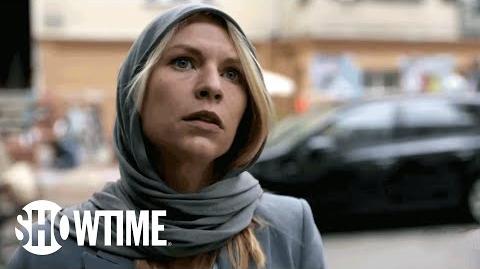 Homeland Next on Episode 1 Season 5