Shalwar Kameez is the third episode of Season 4 of Homeland. It aired on October 12, 2014.

Carrie is forced to intervene when Fara fails to recruit a key asset. Still reeling over events in Islamabad, Quinn zeroes in on a potential lead.

Quinn requests to quit the CIA and is given an interview to assess his state of mind. The conversation turns to the events in Islamabad where Sandy Bachman was killed. Quinn refers to a "choice" he made in regards to Sandy and Carrie who were in the car with him at the time, but doesn't elaborate. When the interviewer asks Quinn whether he and Carrie are romantically involved, Quinn gets angry and walks out of the room.

Carrie arrives in Islamabad and learns that the Embassy has been placed on lockdown. Nevertheless, she eludes her security detail as well as ISI surveillance and goes to an alternate base of operations she has established, where her trusted allies Fara and Max are waiting. Their goal is to make contact with Aayan Ibrahim. Fara makes the first attempt, visiting Aayan's school posing as a journalist from London. Aayan refuses to speak to her and leaves immediately. Fara reports back to Carrie that Aayan was "terrified". Carrie notes that if Aayan was silenced by someone, he must have valuable information.

The next day, Carrie feigns an illness in a coffee shop bathroom in order to lure Aayan to help, since he is a medical student. When Aayan enters, Carrie identifies herself as Fara's bureau chief. She tells Aayan that she knows he is in danger, and asks him to tell her his story. Carrie offers him protection as well as the option to continue his studies in England or the US. Aayan doesn't respond one way or the other. Carrie gives him her card as she leaves.

Quinn, tirelessly watching amateur video footage of the melee which resulted in Bachman's death, notices a man in a couple of the videos who is wearing an earpiece. Quinn realizes that the incident was premeditated and phones Carrie with the news. Carrie responds that she needs Quinn in Pakistan more than ever, as there is nobody else she can trust. Quinn reluctantly agrees to go.

"Make physical contact if you can." - Carrie for Fara about Aayan

“She was your fiancee?” “For about two minutes. A hundred years ago.”

“You won’t ever see me again if you don’t want to. But you should want to.”

"You're part of an important story. I want to be the one to tell it." - Carrie for Aayan

“Shit, Carrie, you know you’re the hardest person in the world to say no to.” “God, I fucking love you Quinn, you know that, don’t you.” “…Yeah.” [Quinn blankly stares into space.]

Goodbye, Quinn’s building manager whose name was so rarely said as to be basically nonexistent. You were a cool character—and for real, this back and forth between you and Quinn reveal so much of his fractured mental state:

“You don’t know what you heard or didn’t hear, do you understand?” “Jesus, Peter, you’re scaring me.” “You should be scared. These people do not fuck around.” “What I wanted to say to you is that nobody should have to go through what you went through. Nobody. And if that guy shows up here again, I’d say it to his face.” “I’d like to see that. I really would.”

“Carrie may not behave like an action hero, but she has the recklessness of one. In her own way, she’s doing extreme, unlikely things with her body. Were she resting on her sexuality and advancing solely through manipulation or just fucking for status, her character might be despicable, but the intricate plotting of Homeland has her behavior yield serendipity that her brilliant mind then decodes.” – Rich Juzwiak

“There is something very powerful about undeniable truths—those desires that can’t really be changed, even if they can be controlled. But there’s also something really painful about them, and it’s mostly the pain that I found myself focusing on. It’s not that the relationship is interesting because it’s romantic—I’m finding myself drawn to the dynamic between Quinn and Carrie because it’s complicated. And because despite its other flaws, Homeland has paid a lot of attention to the way these two characters are growing, whatever dynamic Quinn and Carrie have and are developing is pretty different from what she had with Brody.” —Sonia Saraiya

A shalwar kameez is a Punjabi outfit for either men or women (though primarily women in my experience), worn all through the Indian subcontinent—including, of course, Pakistan. “Shalwar” refers to the pants, “kameez” to the top (it’s the same root word as “chemise”). There’s a third item, a long scarf-type thing, that is optional, which is why it’s not in the name. 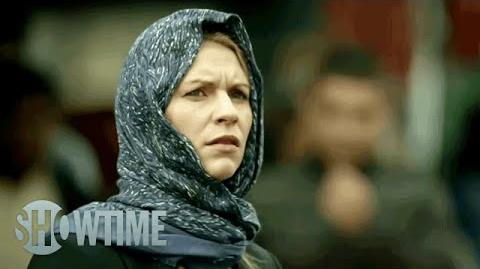 Homeland Next on Episode 3 Season 4