Standoff is the third episode of Season 7 of Homeland. It aired on February 25, 2018.

During an appointment with her therapist, Carrie ambushes the woman while nursing a head wound, insisting that she needs new medication. Her therapist is skeptical but when Carrie returns home to a freaked out Maggie, who says she did not know where her sister was and that Frannie was home alone, she says that she will be on medication that will knock her out for a few days to break the manic cycle before she can try new medication. She is scared and more paranoid than ever of Frannie seeing her in a psychiatric ward.

Carrie takes her drugs to pass out but she gets woken up, first by a phone call and then by frantic pounding on the door, which is from Dante, who did run the screenshot of the woman Carrie saw in Wellington's home. The woman's name is Simone Martin and she has been in a romantic relationship with Wellington since meeting him four years ago. She is back in D.C. and happened to be near the prison where McClendon died the day before he was incarcerated. He knows this as he found a parking ticket placing her just three miles away. Carrie is skeptical but cannot resist a connection like this and even though she explains her bipolar disorder to Dante, insisting that she needs to stay home, she doubts herself and decides to join him to stake out Simone's house.

When they see Simone leaving her apartment, Carrie ditches Dante and decides to snoop around Simone's home by breaking in through a window. She finds a parking violation, copies the contents of Simone's hard drive to her USB key and snaps a picture of a photo of Simone and Wellington together. She takes other photos and leaves via a window only to be stopped by two policemen who have been patrolling the area after receiving a call about a woman breaking into an apartment. High on drugs, she will not tell them her name and tries to convince them she was there to feed a friend's cat but as they do not believe her they haul her off to the station to be fingerprinted.

Meanwhile, Saul and a cavalry arrive at Brett's hideout with Agent Maslin warning him that his plan is crazy but all Saul wants to do is talk. When Brett walks out to greet Saul, he has an army of his own, proudly displaying their rifles and artillery. The FBI also draw their weapons just to make a show of force but Saul keeps calm, telling Brett he wants to talk things through in front of their respective camps - something that appears to take Brett aback at first.

While the latter mulls over Saul's offer, Saul reports back to Wellington and Keane, telling them he needs authority over negotiating Brett's surrender. If they go about it the wrong way, they will put everyone in danger but the agents are ready for a fight. After their conversation with Saul, Wellington thinks they should drop all charges but Keane wants Brett in custody as "he's a menace". In the Situation Room, when a general presses her about leading a a strike against the Syrian army, she chides him for making her agree to the same strike he proposed before. She then threatens the room, telling them she will not back down from reining in America's military might, one of her initial campaign goals.

After thinking over Saul's offer with JJ's father, Brett thinks about what it means to Saul as the man bringing him in. He correctly deduces that he is high on Keane's list of priorities and although Saul could have taken him by force, he did not. He voices his concern over how long this "gentlemanly standoff" can last, since they are outnumbered, but JJ's father says it does not have to. At that, Brett approaches Saul and tells him they have ten minutes to chat. However, all Brett can argue is that he is giving his audience what they want to hear but Saul sees through him and says they could easily jam his communications and stop his feed, but wants to know what it will take for him to leave the compound. Brett's terms are straightforward: he wants amnesty for everyone who has helped him, including Sharon and more importantly a televised trial so that it gives him the chance to espouse his opinions to the nation as long as he needs to. Saul explains to Keane that it could take years for the trial to begin, but she bristles at the idea.

From inside the house, Brett watches Saul talking to Keane with Sharon telling him he is doing the right thing and gets ready to leave but Brett says Saul has no idea what is about to hit him. He then tells Sharon to take her bags upstairs but instead she runs to the feds and warns them that Brett has something else planned. The feds draw their guns as Brett's reinforcements arrive and a standoff ensues with Saul caught in the middle, as he is grabbed by Brett's men. Agent Maslin says they are prepared to use force to get Saul back until he is suddenly released. Although he thinks he has won, Brett is actually worried about what he has done as he has declared war on the feds and there is no other option to get him to surrender peacefully. Saul is also dismayed as he watches the men embrace and head back into the house. That night, he watches as the place becomes a small war zone.

Keane and Wellington have learned that the standoff has attracted the attention of the media and Brett's plan has worked. The standoff will be front page news everywhere and Wellington tries to persuade Keane that they need another story to stop it. He suggests an American offensive against a convoy in Syria, convinced that it will work. However, Keane is against a strike and will not agree to it so Wellington decides to take matters into his own hands. Hours later, after Keane has gone to bed, he phones the general and tells him that Keane has approved the strike and lies that she wanted him to pass on the message as soon as possible, rejecting the formalities that require her approval directly, and warns that she could change her mind in the morning. The general accepts and Wellington passes on the code to launch the strike - without Keane's knowledge.

Carrie is eventually told that she can leave the police station and finds out that Dante, who had been trying and failing to contact her, has used his connections to track her down and bail her out without having her registered in the system. As he drives her home, she asks him to pull over and she stumbles to the sidewalk, breathes heavily and tells him how rattled she has been since her fight with child services months earlier. He asks if she wants to sit down for a minute and says he understands what she is going through, revealing that an ex of his had bipolar disorder but that they broke up due to his alcoholism. They sit in silence on the curb. 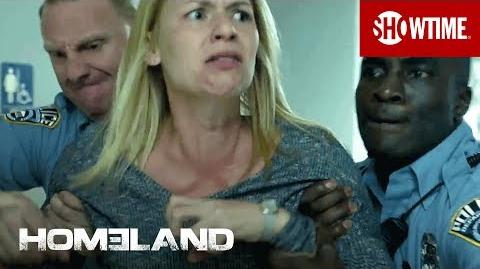 Next on Episode 3 Homeland Season 7