Carrie Mathison and Peter Quinn make a decision. Elizabeth Keane is also considering how to proceed. Meanwhile, Max is in trouble.

Quinn drives to a diner, picks up a gun, and briefly examines his wound, which is causing pain. He goes into the diner and speaks to a waitress who finally recognizes him as Johnny. Nicki, the waitress, immediately talks about the past, other mutual friends and starts chatting, whereby Quinn remains rather taciturn. He finally asks if she worked here last night. Since she denies this, the conversation is over for Quinn. He continues to drive around and observes a house with a US flag hanging from it.

Max tells Carrie about his experiences at his new job, but Carrie doesn't really listen. But Max makes it clear that he has discovered something big. Carrie explains that he shouldn't go there anymore. If Dar Adal is really behind it, then maybe after her conversation with George Pallis it will be sorted out anyway.

Saul is on his way to Pesach and keeps checking to make sure he isn't being followed. When he arrives at the meeting point, he is told that Pesach is out of the country, but is given a bag with the items requested. He briefly checks the completeness and is then satisfied.

Carrie has let herself be driven to George Pallis and, as she is saying goodbye, the driver tells her that she should reconsider her visit with her daughter. Carrie is confused, but immediately calls the youth welfare office and is told that Franny got a fever during the night and that she is now at the doctor's, so the visit would have to be postponed. However, it is not yet possible to say when that will happen. Shortly thereafter, Carrie meets Rob Emmons, who, when asked, explains that he did not send her a car. A little later, Pallis also denied this question. Preparations for Carrie's testimony are underway. When the video recording begins, Carrie apologizes. She can't do it, she's changed her mind. Puzzled, she leaves Emmons and Pallis. Outside, she uses the business card to call the driver of the car and only explains that Dar Adal has won and that she now wants to see her daughter. The other end hangs up.

Keane is informed by Rob that Carrie will not testify after all. Keane immediately suspects Dar Adal behind it, especially since he wanted to speak to her unannounced. Dar Adal, wishing to reach a rapprochement after yesterday's talks, which did not go well, is now providing the names for Keane's cabinet that he would recommend. Keane finds three of the names unsatisfactory and Dar Adal makes it clear that they will probably not find each other then. Keane gets angry and wonders what his motives are, which Dar Adal claims he wants to keep the country safe. But Keane wonders how someone who was elected by half the country could be so influenced by someone who was never elected. She is aware that Dar Adal is merely pursuing his politics. Dar Adal threatens her not to mess with the establishment. However, Keane refuses to be intimidated and Dar should remember this moment as the one Keane decided to put Dar behind bars. Dar says goodbye and calls O'Keefe directly to let him know he's good to go.

Quinn has a boy play a prank for money because he wants to make sure no one is in the house he's watching. Since nothing moves, he gains access. The alarm goes off, but Quinn knows the code and turns it off. He recalls at this moment years ago attending a meeting with army lads that included Jamie McClendon as spokesman. Quinn notices a group of people coming and he quickly hides. While doing so, he comes across a van in the garage that looks like the one Sekou was driving.

Carrie is informed that there was a mix-up and another child is sick and the appointment with Franny can now go ahead after all. At that moment, Keane is at the door with her security guards. Carrie lets them in and Keane demands to know why Carrie backed out. Carrie doesn't want to talk about it, but Keane realizes that Dar Adal apparently blackmailed her with Franny. Carrie makes it clear that unfortunately she can't help Keane. She's on her way.

At a restaurant, Mira Berenson is handed an envelope by Saul, who gives her instructions for an immediate meeting. Mira follows all the instructions and eventually meets Saul, who explains that he's in trouble and that's why he has to go. You shouldn't look for him or say anything to anyone. He explains how friends will come up to them and ask nicely at first where Saul could be, and then things will only get worse. Mira asks if there aren't other options, but Saul says he would be exposed in public. Mira is surprised that Saul is suddenly interested in something like this.

Carrie has her appointment with Franny, but when she registers, she sees the video that O'Keefe made to discredit Keane's son. When Franny comes, she is with her immediately. At the same time, Keane is discussing with her staff a response to the public defamation of her dead son. Keane is advised not to say anything but rather to change the subject, but Keane won't let it go and demands a press conference the following day.

Dar Adal meets O'Keefe at his fake news center, which Max watches. He tries to take a picture on his phone without being noticed, but crashes into Trent, who realizes something is wrong.

Carrie is in front of her apartment where Clarice is waiting, who shows her a video of Quinn making it clear that Carrie can trust Clarice. Carrie is confused that Quinn is actually under arrest, but is persuaded to go with Clarice.

Max is asked about his cell phone by his boss. But Max says he doesn't have any with him. Max is searched and you quickly find something, which is why he is taken away. Trent betrayed him.

Saul is at Carrie's door, but no one is there. He breaks in and then leaves her voicemail that they urgently need to talk and that she shouldn't be surprised to find him in her kitchen. Saul is looking around Carrie's apartment and comes across Carrie's Recent Events Summary with newspaper articles, pictures, and notes. He also registers a new message on her computer. Saul calls them and finds the short video Max made with his cell phone. Saul recognizes Dar Adal next to O'Keefe.

Keane keeps watching O'Keefe's lying video. Rob tries to calm her down. However, Keane is angry and sad that she put her son in the line of fire with her big mouth and now everyone can see the last seconds of his life, which no one should see. Rob closes the laptop and makes it clear that Keane needs rest.

Clarice has led Carrie to Quinn, who is in a vacant house across from the house he was observing. He has a scoped rifle aimed and shows Carrie that there is a group of people in the house, including the man who was across the street from Carrie's apartment. Quinn targets him for a shot.

the President-elect tells Dar-Adal: "In the future, in case you're wondering, this moment, right now is when I decided to put your ass in jail".

The President-elect says: "this won't come as a galloping shock either" - when she hears Carrie has bailed out of the deposition to incriminate Dar-Adal. 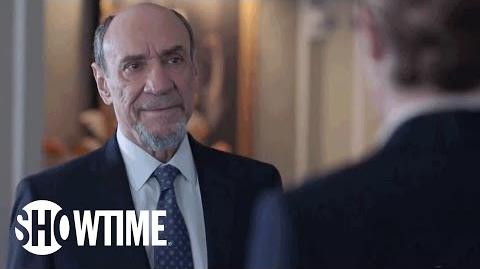 Homeland Next on Episode 10 Season 6