The Litvinov Ruse is the ninth episode of Season 5 of Homeland. It aired on November 29, 2015.

Carrie Mathison (Claire Danes) confronts Saul Berenson (Mandy Patinkin) about what she found out about Allison Carr (Miranda Otto) and together they look for a strategy to save her to lure into the trap. Meanwhile, Peter Quinn (Rupert Friend) finds himself in a hopeless situation.

Etai drives Carrie to the building where he put Saul. Before she gets out of his car, he tells her that she broke Saul's heart, to which she replies that hers was broken as well. When she arrives at Saul's she bursts into tears and lets him take her in his arms. She then tells him what she found out about Allison's life as a double agent. Saul first looks for gaps in her reasoning because he doesn't want to believe it. Carrie knows they need to dig deeper to uncover solid evidence.

Meanwhile, Quinn has been driven to a derelict building and is chained to the wall in an empty room. When everyone else has gone, Qasim offers him something to drink, but Quinn wants to talk to him about the gas bottles that were brought with him. He explains to Qasim that it contains poison gas, which can bring an agonizing death. Qasim doesn't want to hear about it, but Quinn asks him to watch videos about it on the Internet.

Carrie and Saul meet up with Astrid and her boss, Mr. Adler, to tell them about Allison. In order to get solid proof, they ask the two for help. Herr Adler is initially skeptical, but Saul convinces him that exposing Allison is just as important for the German secret service as it is for the Americans. They begin planning their surgery, with Saul immediately agreeing to bug Allison's house since he plans to visit her anyway.

While Qasim follows Quinn's request and watches videos of people dying from poison gas on the Internet, Saul makes his way to Allison. He claims to have been offered asylum in Israel. Since he will be on his way there the next morning, he wants to spend one last night with Allison. He tells her how much he will miss her. Later the two lie in bed together. Saul makes sure Allison is sleeping and then leaves the bedroom to hide a radio transmitter in her purse and install spy software on her smartphone. As he climbs back into bed with her, Allison asks if everything is alright. Saul claims to have drunk a glass of water.

Meanwhile, Qasim looks at one of the rooms in the building, which contains a container with a thick glass wall. A man named Dr. Aziz arrives and explains to him that this is a test chamber in which the effectiveness of the poison gas is to be measured. Qasim is worried about the gas escaping from the chamber, but Dr. Aziz shows him an emergency syringe with atropine, which reduces the symptoms. Qasim also learns that Quinn is the first test subject.

Astrid and Mr. Adler have called a meeting with Dar Adal and Allison to inform them that they have been offered inside information by an SVR man in exchange for $5 million and asylum in America. Dar Adal decides to work with the BND. Before hitting it, he asks Allison if this is okay, to which she confirms after a moment's hesitation. Back in her office, she texts someone that she doesn't want to go out that evening but wants to eat at home. Carrie, Saul and their colleagues watch from their surveillance room.

Qasim visits Quinn again, who now accepts his offer to drink. Then they talk about the gas again and Qasim tells him about his cousin's plan to poison him with it as a warning of a big act of terrorism. In this way he wants to ensure that Assad disappears from Syria and that the Islamic State is recognized by the UN. Quinn is convinced that this will not achieve his goal. He tries to convince Qasim to stop his cousin's plan, but Qasim doesn't want to betray his family.

Several hours later, Carrie is still waiting in vain for Allison to contact someone in the SVR. In the evening they can finally watch how the man with whom she wrote earlier visits them and the two immediately get down to business in the kitchen. Saul then leaves the room and Astrid tells Carrie that he was in a relationship with Allison. She follows him and the two decide to put more pressure on her, forcing Allison to act. Later that night, Qasim secretly sneaks through the room containing the test chamber. However, one of the rooms is locked and he can't get any further.

Later, Carrie and Saul witness Astrid meeting Allison at a sidewalk cafe. Astrid claims that the man doesn't want to meet them in Berlin because the embassy isn't safe. In this regard, he also has concrete evidence in the form of copies of documents from the SVR. After Astrid leaves the cafe, Allison calls her secretary and asks her to book her a train ticket to Copenhagen for the same day. Then she calls another number, which she leaves a secret code. She then leaves the café and takes a taxi to the main train station.

In the taxi, she removes the SIM card from her cell phone so that she can no longer be tracked. However, Carrie and Saul can still track them via transmitters in their pocket. At the train station, after a few deceptive maneuvers, she gets on an S-Bahn to Potsdam, which takes her to an SVR safe house. She drives the last few kilometers in a car. Meanwhile, Carrie and Saul lose GPS and audio, but via a drone, they see Allison finally meeting Ivan at the safe house. She asks him to bring her from Germany immediately. At the house, she explains to him that someone from the SVR will bust her. Ivan explains that this is impossible as everyone who knows about it is in Scandinavia fishing right now. He realizes that Allison was tricked. He asks his colleagues who are present to immediately destroy all hard drives. He then angrily accuses Allison, who claims to have been careful. When he gets physical towards her, she tells him to keep quiet and then gets an idea. When the police show up, they confront them and allow themselves to be arrested.

Later, Carrie and Saul report to Dar Adal about the Allison revelation. When she is brought into an interrogation room, Dar Adal sits down with her. She claims that Ivan has been working for her as a double agent and has been providing her with SVR internal information for the past 12 years. Dar Adal asks why she ran away today, but Allison explains that she was only concerned for Ivan's safety and wanted to warn him.

Quinn is brought into the test chamber by Qasim and his friends while being filmed by a camera. Qasim whispers for him to run, whereupon Quinn tries to flee. When someone throws him to the ground, Qasim lies on top of him and inadvertently injects him with the antidote. Then Quinn is brought into the chamber. After the gas is released, it doesn't take long for the poison to take effect. Qasim watches with tears in his eyes. 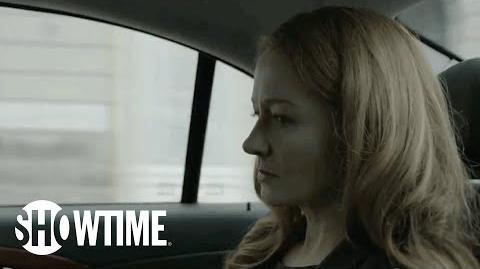 Homeland Next on Episode 9 Season 5