The Return is the sixth episode of Season 6 of Homeland. It aired on February 26, 2017.

Carrie follows a lead. Saul meets an old friend. Keane takes a stand. Carrie wants to find out more about Peter Quinn's pictures: the guy from across the street, the mysterious jeep and the link to the Medina company where Sekou Bah worked. Saul is suspicious about an information lockdown about Tova Rivlin and contacts an old friend, Victor, to have more details about her whereabouts. President-elect Keane is still at a secure location. Her all access phone does not work and her staff still has not arrived yet. She eventually manages to get a message out to her chief of staff Simmons. When he arrives Secret Service finds out that Keane has left the premises.

Carrie (Claire Danes) shows Conlin (Dominic Fumusa) the photos that Quinn took, showing the man across the street who had access to Sekou’s van the night before the bombing. Conlin talks to Saad (Leo Manzari) and confirms that the man in the photographs was in no way connected with Sekou. Conlin tracks down the Jeep in Quinn’s photographs as registered to a private corporation.

At the corporation headquarters, he fakes an interest in employment and learns they are hiring former federal employees and have access to vast amounts of highly sensitive data. Conlin joins a selected group to the lower levels of the building, separates himself from them and investigates empty offices. He is discovered and escorted off the premises. Meanwhile, Carrie visits Quinn (Rupert Friend), who has been brought to a psychiatric ward. Carrie asks Quinn for more information on the man in the photos but gets nowhere; Quinn is upset at her having aided the police to arrest him and accuses her of being part of the conspiracy.

Saul (Mandy Patinkin), suspicious of the events in Abu Dhabi, gets rebuffed at the CIA when he learns there’s a no-surveillance order on Tovah Rivlin. Saul reaches out to Viktor, a contact of his in the SVR, requesting information on Tovah’s recent whereabouts. Viktor comes back to him with photos of Tovah’s clandestine meeting with Dar Adal.

Contacted by Conlin of his discoveries, Carrie goes to his house to discuss their findings. When Carrie arrives at the front door, no one answers. She goes to the back, finds the door ajar, goes upstairs and finds Conlin dead from a gunshot wound to the head. Carrie takes the weapon from Conlin’s hand. Belli (C.J. Wilson) is inside the house with a gun and hears Carrie enter. Carrie sees him in a mirror coming up behind her and is able to make an escape.

President-elect Keane (Elizabeth Marvel), fed up with her situation, gets Marjorie (Deborah Hedwall) to help smuggle her out of the safe house. Pressure mounts on Keane as President Morse (Alan Dale) makes a speech calling for a harder line on terrorism and added provisions to the Patriot Act. Nonetheless, Keane implies no change in her policy when she is questioned by the press upon her return.

Late at night, Quinn is drugged, strapped to a gurney, taken out of the ward and loaded into a van. In the back of the van, Quinn is greeted by Astrid (Nina Hoss). 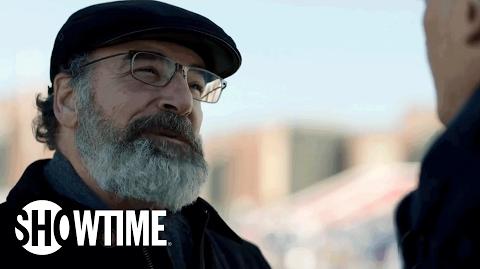 Homeland Next on Episode 6 Season 6