Useful Idiot is the ninth episode of Season 7 of Homeland. It aired on April 8, 2018.

Carrie has problems at home. Saul and Wellington work on Paley.

When Dante (Morgan Spector) awakens, Carrie (Claire Danes) persuades him to further elaborate on his collusion with Simone Martin (Sandrine Holt) and the Russians. Dante tells her of a secret code – “Darwin loves Bitcoin” – the use of which is an emergency signal meant to alert Gromov’s agents to dissolve their network. Saul (Mandy Patinkin) presents a plan to Keane (Elizabeth Marvel) which pushes legal boundaries: to broadcast the code by compromising Twitter’s servers, and violate the privacy of US citizens by tracking who posts confirmations in response to the tweet. Keane reluctantly agrees. Keane and Wellington (Linus Roache) bring Senator Paley (Dylan Baker) into the loop, detailing Simone’s and Dante’s roles in the elaborate scheme to undermine the government, and Paley’s own unwitting role in the subterfuge.

Clayton (Thomas G. Waites) informs Gromov (Costa Ronin) that Dante was arrested and is now in the hospital. When the cyberattack is successfully deployed by Clint (Peter Vack), Gromov realises that Dante has to be cooperating with authorities. He calls his handler, “Mirov” (Merab Ninidze), to request aid in breaching the hospital and killing Dante, but is only told to stand down. Gromov ignores the order and meets Clayton at the hospital. Gromov then shoots Clayton in the abdomen and drags him inside. As he hands Clayton off to the doctors, he swipes one of their ID cards. He uses the card to enter Dante’s room.

Carrie goes to Maggie’s house to try and reconcile, but instead learns from Bill (Mackenzie Astin) that Maggie is meeting a lawyer to seek custody of Franny. When Dante accuses Gromov of poisoning him, he denies it and tells Dante to call Carrie and ask her if she was responsible. Dante calls Carrie, who is picking up Franny from school early. He realises that Carrie is lying to him, but nonetheless he tells Carrie that Gromov is in the room with him. Gromov puts a pillow over Dante’s face. Carrie opts to leave Franny at school in her rush to the hospital, but Franny runs after her and is almost accidentally run over by her mother in the parking lot. After learning that Dante is dead, Carrie has a psychotic break at the hospital as she is overwhelmed by thoughts of what she nearly did to Franny, as well as flashbacks to the deaths of Brody, Aayan and Quinn. 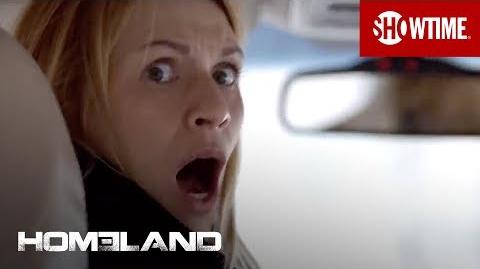 Next on Episode 9 Homeland Season 7