Why Is This Night Different?

"CARRIE, IF YOU WANT FRANNY SAFE, YOU HAVE TO BE DEAD." - QUINN.

Why Is This Night Different? is the fourth episode of Season 5 of Homeland.  It aired on October 25, 2015.

Carrie Mathison (Claire Danes) seeks new answers, while Saul Berenson (Mandy Patinkin) and Allison Carr (Miranda Otto) must work together on a mission. Meanwhile, Laura Sutton (Sarah Sokolovic) tries to contact her source because she doesn't have the new documents.

Saul and Allison are invited to the seder of the son and the Israeli ambassador, who recalls the Nazi era and makes it clear that there are still enemies today. Meanwhile, Carrie wakes up in a dark room. She looks around and sees Quinn, who is very taciturn at first. He finally explains to Carrie that she's on the death list because she seems to have crossed some line. Carrie doesn't know how that could be. Quinn explains that Saul put her name on the list, which Carrie doesn't want to believe. Quinn takes pictures of Carrie looking dead. Then she should implement her plan to go into hiding. But Carrie wants to know how the deal between Saul and him works to find out how her name got on the list. Carrie wants to talk to Saul, but Quinn refuses. No one should know that she is still alive, otherwise someone else will be sent who will certainly not spare her.

Saul talks to the Israeli ambassador about the situation in Syria and the potential American strategy. Saul keeps a low profile and only speaks hypothetically, leading to the comment that he used to be a better friend.

Jonas tries to reach Carrie, but only ever gets the voice mail. Laura Sutton is also on site and explains that her source let her down. She hopes that a hacker Jonas knows can help her, but Jonas advises that she stay away from it and that he doesn't want to implicate the hacker because she is under house arrest. Otto comes along and learns from Laura what it's all about. He explains to Jonas that he should help Laura. He gives in and wants to set up a meeting with the hacker. Jonas then tells Otto that he still hasn't found out anything about Carrie, but that the police can't be called because Carrie wanted it that way. They're both concerned.

Carrie is about to record a video for Franny when Quinn interrupts because the video makes it clear that she is still alive. Carrie says she won't be gone forever, just as long as the case isn't solved. But Quinn makes it clear that Franny is only safe if you always think she's dead, because otherwise they would keep coming back. So Carrie records a new video of herself talking to Franny and switching to the past tense. She tries to explain her job and that Franny doesn't want to be angry. It's very difficult for her to talk about her feelings, but she makes it clear once again that Carrie never pushed Franny away but is the most important thing in her life. In tears, she explains to her daughter on the video that she loves her.

Laura is looking for Sabine, the hacker Jonas set up a meeting with for her. A friend first has to check who Laura is and whether all the precautions have been taken. Then she makes it clear that she herself is Sabine. They quickly get talking and the name Gabe H. Coud, which Sabine could find for Laura. Sabine's friend Claudia makes it clear how risky that would be for her, but Sabine is interested.

Allison is at the airport and welcomes General Youssef and his family, but poses as Dr. Denise Keller, the director of the Seeufer Clinic. Youssef is in Germany so that his daughter can get a donor organ. Allison explains that everything will be fine. A little later they are in the clinic and speak to the attending doctor, who immediately starts the preparations. Allison, meanwhile, makes his way to Saul, who is waiting in an adjoining room. She gives her impressions of Youssef, whom they would like to corner.

Carrie packs her things and Quinn realizes that she still has her old escape plan, which must mean that Carrie would not feel comfortable in Berlin. But Carrie says that she was happy and directs the conversation to Quinn, who was in Syria. Carrie puts on her wig and has Quinn confirm that she won't attract attention anymore. As she leaves, she tries to talk to Quinn again about Saul and the procedure. She believes that even someone unknown could just put her name on it. Carrie says Saul was stupid to set Quinn on her because he would have scruples about Carrie and could spare her. Carrie doesn't want to believe Saul is against her now.

Allison has lured General Youssef into her office on the pretext that he has something to fill out. She confesses that she is actually part of the CIA and that he is surrounded by CIA people, except for the medical team. She explains to Youssef how they can talk undisturbed the next day. Saul observed all this on camera.

Sabine is able to locate Gabe H. Coud and tells him that Laura's USB drive was empty. Coud or Numan explains that he didn't know that and that his friend was probably responsible for it. He calls him immediately, but can only speak to voicemail. He heads to his girlfriend, who angrily interrupts her online strip and calls him so Numan can talk to him. So he learns that his buddy wants to make a deal with the Russians that will bring them a lot of money. Korzenik meets his contact directly, but Boris is surprisingly replaced. Korzenik first wants to see the money and then hands over the stick. He promises that it is the only copy and wants to leave, but the Russian persuades him to stay, explaining that he would like to trust him but is unfortunately a cynic.

Youssef and his wife are waiting for news from their daughter when he decides to go smoke a cigarette. He can also make it clear to his bodyguard that he should stay because he's not going to leave. So Youssef goes out and then meets Saul, who explains to him that they will surely lose the war. He should think about where his family will be. Saul states that he wants to put him in Assad's place. He is also given a lot of money so that he can acquire the influence he needs. Youssef doesn't want to go into this at first, but Saul makes it clear to him that only he can lead the country into a good future.

One of Krupin's contacts got hold of his girlfriend and found a USB stick on a stereo. He immediately calls Krupin, who has badly mauled Korzenik. He swears that there is no other copy, but is strangled by another Russian employee. Meanwhile, Numan is on his way to Korzenik's apartment and sees that there has been a break-in. He goes in and only finds his girlfriend dead.

Quinn is outside the post office with Carrie and explains that he will put the papers in the drawer and they will wait for Saul to pick them up. Then they will drive off and Carrie will fly as far away as possible. Quinn breaks free while Carrie stays in the car in her wig and looks around. Meanwhile, a man at the post office texts a man saying Quinn is there. He drives off immediately and has his gun ready. As Quinn emerges from the post, the man opens fire. Quinn is hit but is able to knock out his opponent. Carrie quickly drags Quinn into the car, takes a picture of the attacker and takes the cell phone with her. Carrie wants to take Quinn to a hospital, but Quinn says it's okay. They also discuss what just happened and Quinn says that they would obviously like to see him dead now too. Carrie is supposed to go now, but she doesn't want to leave Quinn behind and drives back to his apartment. There she takes care of his wound, which fortunately is a bullet.

Youssef and his family get back on the plane when Allison approaches Youssef again and he explains that he would like his wife and daughter to be allowed to stay in Europe until the conflict in Syria is over. Allison explains that doing so would only raise suspicion, which is why it's not possible. Youssef wonders why people trust him, after all he can simply take the money and be happy with his life. Allison replies that he's certainly smarter. He gets on the plane while Allison goes to Saul's car and tells Saul about Youssef's request, which Saul takes as a positive sign.

Carrie looks at the picture she took and also finds a number in the phone's memory, which she dials at Quinn's suggestion. Allison's phone rings and she answers in Russian. Carrie hears this and finally hangs up. Meanwhile, Youssef's machine is in the air when it suddenly explodes. While Saul is startled, Allison looks up at the sky without any reaction.

“You are the most important… the best thing that I’ve ever done. You make up for every mistake that I’ve ever made. And altough you probably don’t believe it, I love you very very much.” 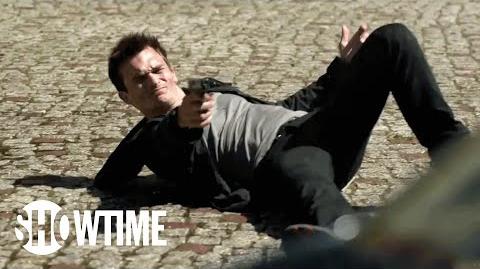 Homeland Next on Episode 4 Season 5